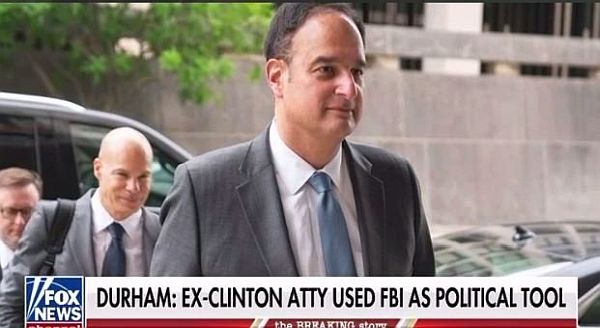 Michel Sussmann was the Perkins Coie partner than ran the digital operations -- Alpha Bank, the DNC hacking, the Listener project. Sussmannn gathered false Internet "DNS data" on Trump and used that to create a fully fictional story about Trump using a secret server connected to the Alfa Bank to communicate with his Russian “handlers.” Sussmannn also peddled a false story about Russian smartphones connecting into the Trump White House.

Sussmannn is charged with lying to the FBI when he allegedly claimed to not be working “for any client” when he passed along since-debunked computer research by Joffe and others that purportedly tied former President Donald Trump’s 2016 campaign to Russia’s Alfa Bank.

We know Sussmannn hid his relationship to Clinton from the FBI, pretending to be a “concerned citizen,” that has now placed Sussmannn under indictment by Special Counsel John Durham, and in his own defense filing does not dispute the basic facts. He only claims his lying was immaterial.

He was the interface between the Democratic National Committee (DNC) and the operators. He is also the guy that hand-carried the phony Alfa Bank data to the FBI, swearing he was acting as an independent opoerator.

Sussmannn also presented a second set of data to the CIA that consisted of internet traffic related to, among other locales, the Trump Tower, Donald Trump’s Central Park West apartment building, and the Executive Office of the President of the United States. In providing this data to the CIA, the “trusted” Sussmannn told agents, the data “demonstrated that Trump and/or his associates were using supposedly rare, Russian-made [Yota] wireless phones in the vicinity of the White House and other locations.”

Not only was there “no support for these allegations,” according to the special counsel, the data provided to the CIA was cherry-picked to create the appearance of a Trump-Russia connection, while additional data compiled by the researchers but not shared with the CIA conflicted with the Yota cell phone theory.

Durham also states the evidence establishes that Sussmannn “carried out his September 19, 2016, meeting with the FBI in order to, among other things, further the interests of the Clinton campaign.

Sussmannn met with Baker on September 19, 2016, to provide the FBI attorney with data and ‘white papers’ that purported to establish a secret communication channel between the Trump organization and the Russia-connected Alfa Bank, Sussmannn falsely claimed he was not acting on behalf of a client, when in reality Sussmannn was working both for the Clinton campaign and an unnamed ‘U.S. technology industry executive’ since confirmed to be Rodney Joffe.”

The FBI didn’t only have a “discrete decision” about whether to open the case or not, they also had decisions about how to conduct the investigation. And, at least arguably, if they had been told up front that the information Sussmannn was giving them was coming from the Clinton campaign (and people associated with the campaign), that might have had an impact on how they approached it.

This is very similar to the argument we saw play out with regard to the FISA court. Democrats argued that FBI submissions to the court were sufficient and accurate but the IG report and court itself eventually said they were not even close. In fact the IG identified 17 separate errors which led to the court taking a second look at all of the FBI’s requests for FISA warrants.

The trial is scheduled to begin on May 16. Clearly, Durham isn’t primarily interested in sending Sussmannn to jail. He’s interested in getting him to cooperate with his investigation to avoid that possibility.