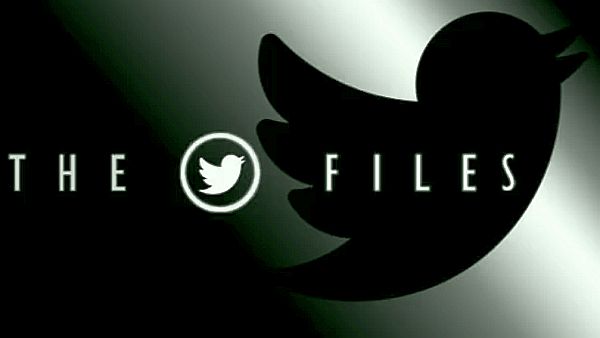 Right off the bat, you will see leftists rise to the release by attempting to defend Twitter with the, "it's a private platform" distraction. House Democrat staffers wanted Twitter to censor more, arguing the “First Amendment isn’t absolute,” according to internal Twitter emails.

Musk nipped that spin in the bud.

As much as this is about access to the Public Square -- this story is far more about the corruption that exists in everything the Democrats, and Joe Biden in particular, touch. Twitter is just another layer -- and this layer is really an exemplar for them all -- Instagram, Facebook, Google YouTube, you name it!. -- they were all willingly in bed with the feds and the DNC to hide a conspiracy and affect a national election -- the second time in a row that Democrats tampered with a national election.

The documents, mostly internal communications from Twitter and emails with external parties, showed widespread unease with the decision to censor the Hunter Biden laptop story, and concerns about how it could be explained to lawmakers and the public. The decision to censor the story was spearheaded by Vijaya Gadde, then the head of Trust & Safety, Twitter’s top censor.

Internal Twitter deliberations reveal Twitter management engaged in willful ignorance of the facts of the story in order to justify censoring it on the platform, by using the company’s "hacked materials" policy as an excuse to bury the Post’s reporting.

Twitter knew their story wouldn't hold. First, because the "hacked materials" ruling required an official or law enforcement finding of a hack. Twitter never had one. They went with it anyway. Second, the Post reporting was based on a hard drive abandoned at a computer repair shop, not “hacked material.” An FBI receipt, given to the repair-shop owner, bolstered that fact.

Former FBI Chief Counsel, Jim Baker -- of Russiagate fame -- was Twitter’s Deputy Legal Counsel at the time, said, “[We] need more facts to assess whether the materials were hacked. At this stage, however, it is reasonable for us to assume that they may have been and that conclusion is warranted,” giving Twitter the legal cover to proceed in its disinformation campaign to cover the political fallout. Baker saw "no evidence ... of any government involvement in the laptop story."

Twitter never contacted the New York Post to inquire about facts of its story, even though the Post published an image of a federal subpoena, showing the computer was in the FBI’s possession, after being turned in by the computer repair shop owner.

The point is, there was no direct evidence of a hack or a Russian conspiracy. Even Twitter's recently-fired chief censor, Yoel Roth, subsequently admitted he and others did not believe they had a clear basis existed to block the story, but they did it anyway.

In an early conception, Twitter more than lived up to its mission statement, giving people "the power to create and share ideas and information instantly, without barriers."

As time progressed, however, the company was slowly forced to add those barriers. Some of the first tools for controlling speech were designed to combat the likes of spam and financial fraudsters.

Slowly, over time, Twitter staff and executives began to find more and more uses for these tools. Outsiders began petitioning the company to manipulate speech as well: first a little, then more often, then constantly.

By 2020, requests from connected actors to delete tweets were routine. One executive would write to another: "More to review from the Biden team." The reply would come back: "Handled." 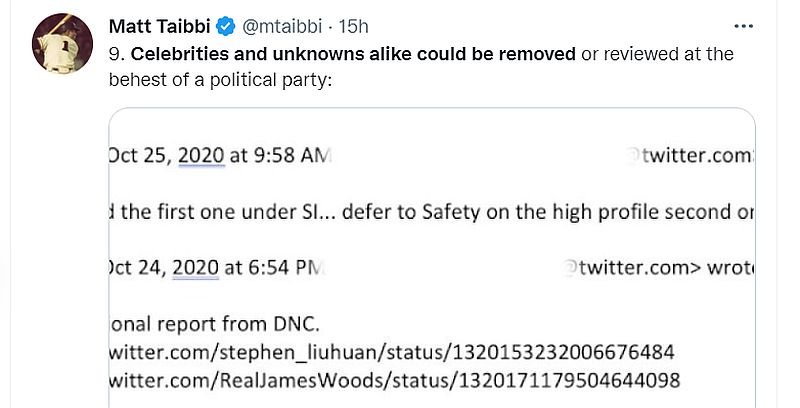 It became so bad, that Twitter was censoring users based on direct requests from multiple entities within the Democratic Party. The DNC, the same outfit that initiated and funded Russiagate, requested actor James Woods be removed from Twitter. Woods intends to take the DNC to court.

Twitter took extraordinary steps to suppress the Hunter Biden laptop story, removing links and posting warnings that it may be “unsafe.” They even blocked its transmission via direct message, a tool hitherto reserved for extreme cases, like child pornography.

Taibbi says there is much more to come, including answers to questions about issues like shadow-banning, boosting, follower counts, the fate of various individual accounts, and more, but the one thing we have to remember, is -- this is still just one instance of the corruption visited on the country by the Democratic Party and its members and supporters. It's been going on for seven years.

How is the Twitter Files chicanery any different from Watergate in sum and substance?

It’s worse than Watergate by a large measure. Watergate affected a few files on Nixon. 2020 was an illegal intervention into the entire electoral process. It wasn’t just Trump v. Biden. It was down ticket intervention as well. Local races were similarly hijacked. It's an epic crime by, and of, itself -- but it's really only another layer of the corruption.

There was Russiagate, with the slander of Russian collusion and peeing on hookers, There were four investigations that took years and wasted millions. None of these investigations ever discovered that Hillary and the DNC were behind the conspiracy. There was FISAgate, and the FBI's lawless warrants they used to spy on Americans.

Since the spring of 2020, we have watched the DoJ and the FBI shred the Constitution with bogus warrants and unnecessary armed raids on peaceful, sleeping Americans.

We have seen repeated attempt by the Biden regime to install formal systems of censorship, controlled and enforced by government bureaucrats. Joe Biden, himself, has made raging speeches, othering his fellow citizens as MAGA Republicans and "domestic extremists," and urged American to rat on their neighbors.

We watched as Democrats created the Jan. 6 operation with embedded FBI agents, accommodating Capitol Police, and little security -- and then "The Committee" violated the 5th and 6th Amendment rights of Americans by locking them in cages without due process.

Right now, the Biden government is converting the federal government's core policy to one based on "Racial Equity," and "Gender Equity." Not one member of the House, or one Senator, has ever voted for one dime to support this initiative, while billions are being reallocated from existing budget items to implement the co-poisons of "equity" and "gender" throughout the federal government. If that's not bad enough, Biden's government is leveraging all the foreign governments, NGOs, public and private corporations it has relationships with to buy into its agenda.

The Twitter deal is a BIG deal. It shows how the Biden government is an autocratic government that will not hesitate one second to violate any right, any law, or any fairness, in furtherance of its goals, but the Twitter scandal is, by any means, the biggest Democratic crime. The Democrats and their allies in the media are covering up a bushel-full of scandals.

As far as the Democratic Party is concerned, the law is both a tool and a weapon. For themselves, it is something to use, to manipulate. Against its opponents, it is a weapon. Justice and fairness, the things that make America, America, no longer exist with these people. They are revolutionaries and we see their hatred and disgust of all things American ever day.

One of the biggest political scandals in modern American history was revealed Friday, and 99% of the media is silent about it. The 1% that is talking about it are critical or dismissive of the story. It's the way it has to be. The media knows this control of the narrative is not being done autonomously by tech firms. The censorship is being coerced by the in-power Democratic Party that explicitly wants more censorship online.

The Democrats prove, on a daily basis, that they will do "whatever it takes" to defend their revolution, and the Biden family. They must. They have no choice. The criminality and corruption of the Bidens and Democratic Party is just too deep.

There's no making any of this go away. So, what's next?