Why The Left Hates Trump

The Left loathes President Trump -- but why?

Tens of millions of Americans believe Donald Trump is an intrinsically evil person. These millions have been told that Trump has committed unspeakable crimes in office, and should never be allowed to run for office again. Many would be content to see him executed for treason.

The conditioning started early. It began as soon as Trump announced, and intensified throughout the primaries, but the media attacks were all-day and all-night in the run-up to the election.

Trump was called every pejorative in the book: traitor, racist, NAZI, Russian agent, profiteer, and a hundred I forgot -- and all he did was run for office.

The attacks came from everywhere -- including the taxpayer-funded National Public Radio. One wouldn't expect NPR to take sides in a national political campaign, but it did. Not only did it take sides, NPR compared candidate Trump to NAZI Fuhrer, Adolph Hitler. 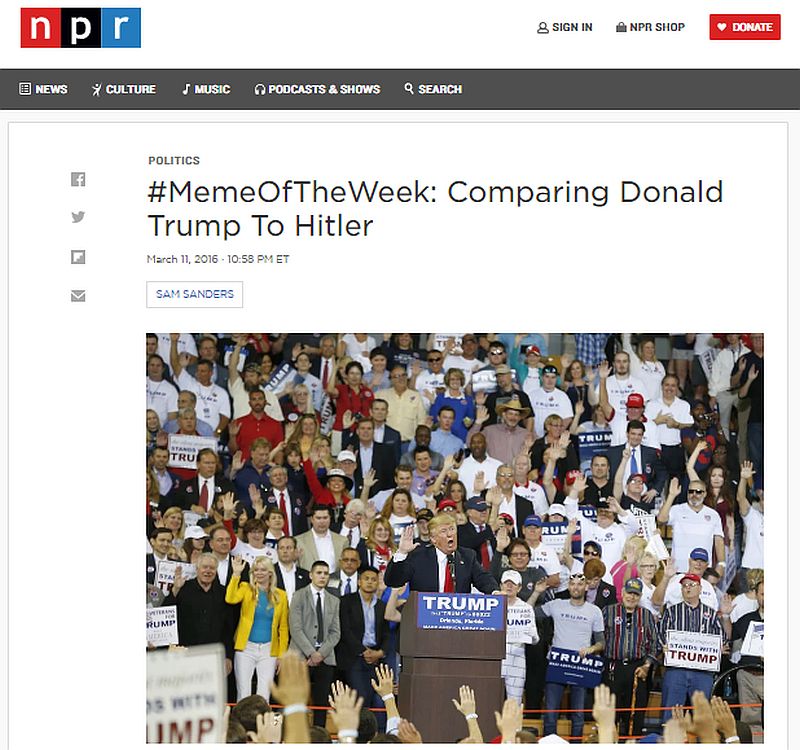 NPR didn't come right out and say Donald Trump was Adolph Hitler-like, but what is left in the reader's memory is the association between Trump and Hitler, and it was repeated endlessly on TV, radio and the Internet.

This CNN chyron has a whole lot going on in a few words. First of all, Trump is a racist. That's the underlying message. That Trump is a racist is a given, but the chyron adds a relationship to white supremacists, who, we all know, is anybody that supports Trump. 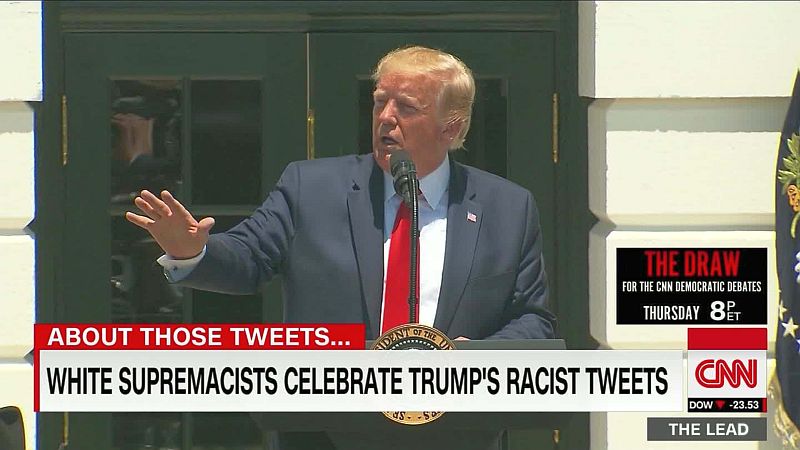 CNN doesn't show you Trump's "racist tweets." They leave that up to the viewer, who has now been reinforced in his or her belief that Trump is a racist, and those associated with him are white supremacists. It's how mass communications works. CNN, and worse, MSNBC, presented these images, backed up by an endless stream of "experts" who were willing to slander Trump, 7/24 for a year -- and they didn't stop after the election -- it got worse, promoting Hillary Clinton's Russiagate hoax.

If there was any Democrats that didn't believe Trump was evil incarnate, they would have been swayed when their hero, Hillary, joined the chorus with her million-dollar campaign of hoaxes and lies. 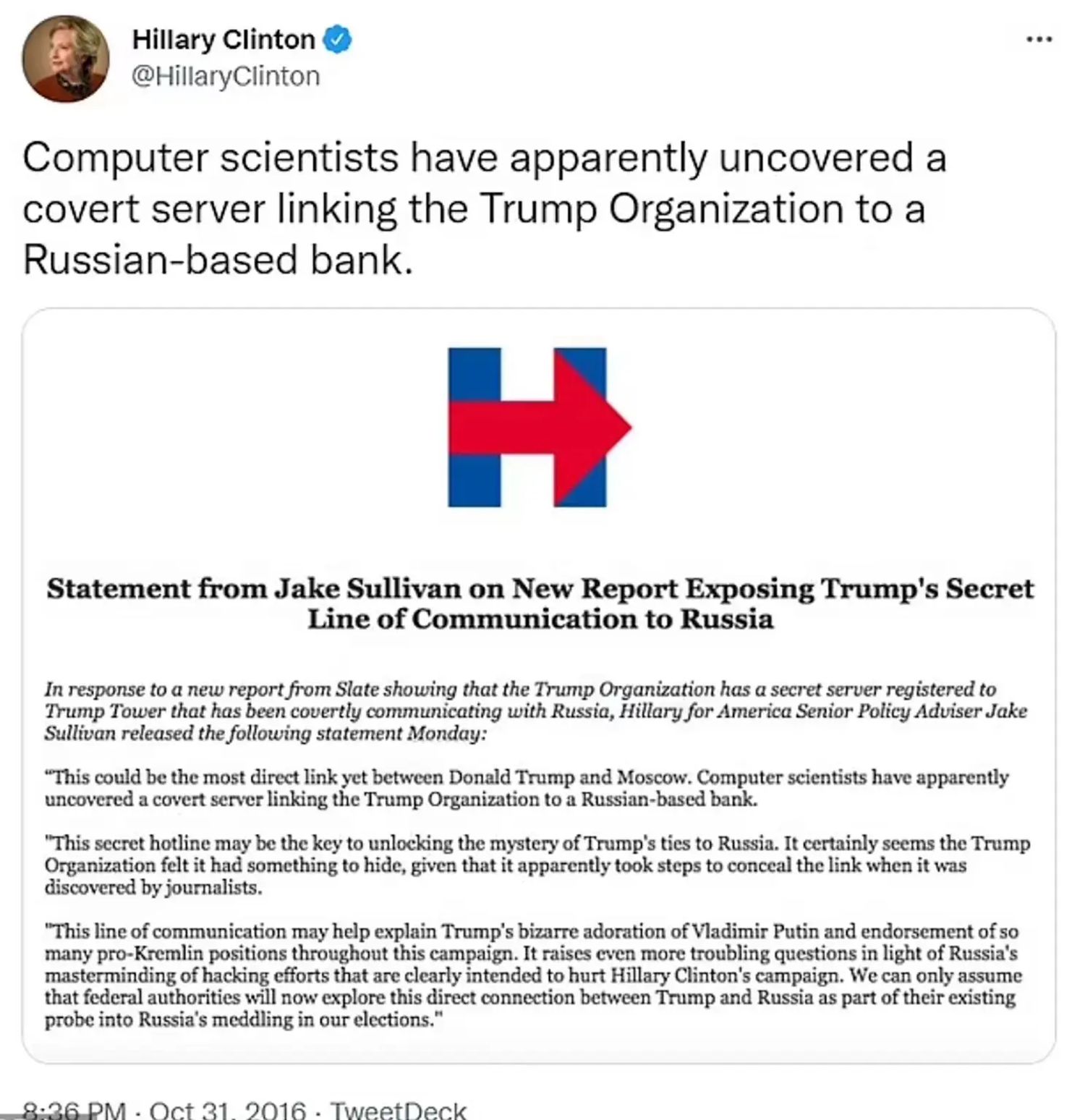 Then Trump had the nerve, the unmitigated gall, to defeat Hillary in the 2016 election. This was a psychic shock to Democrats and leftists in general. It was Hillary's turn. Worse, it forecast the end to Barack Obama's fundamental transformation of the United States of America.

Well, that locked it. This guy had to be stopped. So, the Democratic Party and their allies in the mass media commenced to use every dirty trick and deceit in their playbook to destroy Donald Trump and anybody associated with him. They have been at it for seven years, and they haven't stopped.

Trump has been investigated, and accused, and subpoenaed, and indicted, and impeached by every Democrat who is able to find the funding to mount a campaign against the former president -- and all they ever end up with is bupkis!

Despite all of the investigations -- the millions, more likely billions, spent to take Trump down, none of these people can tell you what Trump's horrible crimes are, except in vague generalities. They echo the rumors and innuendo fed to them by the networks, but have no rational facts to back up the stuff they deeply believe.

Here is a perfect example:

This stuff is the ravings of a madman, but Reiner is an extremely successful director. What causes that fracture in the brain, that results in superb organization and management skills on the one hand, and complete hysterical ravings, on the other?

Donald Trump has never been convicted of a crime -- ever! -- but there are tens of millions who believe he is a criminal, and that is because mass media has been promoting and regurgitating "Trump's crimes" as a meme for seven years.

Then there is the pure leftist, like Sam Harris. Sam is an "influencer," and nobody needs to tell Sam what to believe. These guys are creative in their beliefs. They make up their own stuff, and because they are "influencers," their bullsh!t is endlessly repeated by intellectuals on intellectual websites. Stuff like:

"Hunter Biden literally could have had the corpses of children in his basement, I would not have cared"

“Whatever the scope of Joe Biden's corruption is... getting kickbacks from Hunter Biden's deals in Ukraine... or China, it is infinitesimal compared to the corruption we know Donald Trump is involved in."

Saying the corruption of the Biden family is infinitesimal compared to the corruption "we know Donald Trump is involved in" is absurd, but Harris is exposing the Left's mindset and how it is is reinforced. The fact that Trump has never been convicted of a crime is not relevant.

Stuff the Bidens may or may not be or have been involved in is not important. Destroying Trump -- and his supporters -- is all there is.

The mass media has made Trump the symbol for everything the Left hates -- including America -- and that hate is deep and it's primal.

If you believe America is racist, Trump is a symbol of that racism, and the people who support him are, by extension, racists and white supremacists -- "MAGAts." It's all one nice, neat package.

If you believe America is homophobic or transphobic, Trump is a symbol of that homophobia and transphobia, and the people who support him are, by extension, homophobes and "deplorables."

It's how it works, and it continues daily. You will see it today on Meet The Press and Face The Nation.

The mass media did that in the six years since Obama left the White House. You can't say it isn't true. Trump is the symbol for 20th Century America, the fascist, racist, homophobic, transphobic country, crawling with domestic extremists America, that the Left is doing everything in its power to destroy.