There stands the new president, flanked by uniformed Marines, and bathed in dramatic light, as he delivers an address to the people,warning them that his political enemies are their country's enemies, and are threats to their democracy.

Standing in front of Independence Hall, an historic American site, bathed in blood red lighting, Biden, the grim old man, with clenched fists raised in anger, screamed at us, and described us as "extremists" and "threats to the country."

Two Marines stood guard in the background. With their faces in shadow, only their white-gloved hands visible -- a subtle reminder that he was backing up his words with the U. S. military. He is the guy with the F-15s and "nukes," after all.

It's pretty clear that Biden's set designers wanted a stage that enhanced the Biden message of fear and loathing, so they chose to go with the "High Chancellor Adam Sutler" look from the movie, "V for Vendetta," a film about a shadowy freedom fighter, known only by the alias of "V," who plots to overthrow a tyrannical government. 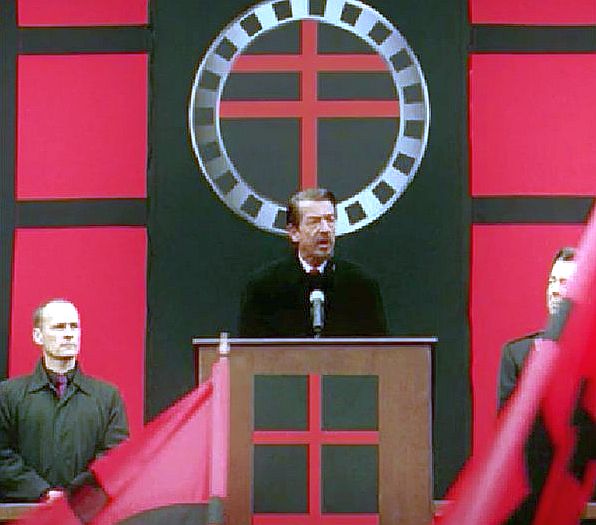 Even "journalists" with CNN and CBS severely criticized Biden for having the U.S. military behind him as he gave a political speech demonizing MAGA Republicans as a dark threat to American democracy. Many found dark parallels in the staging, the lighting, the props and the mannerisms and tone of the speech. 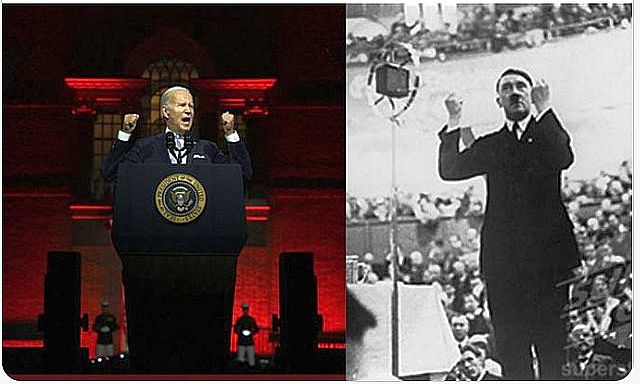 Dave Portnoy writes, "So I’m minding my own business last night watching college football. And these images, I’m not watching Biden’s speech, I didn’t even know he had a f^cking speech. But all of these images come out. And, my God, the man looks like Nazi Germany with a dash of Cold War Soviet Union with a dash of Dwight Shrute with a dash of Hunger Games. Just like the biggest dictator-looking set ever. Surreal. It’s surreal… If you can’t look at the photos and imagery that came out from Biden last night that without a doubt, it was the worst staging in the history of American politics… This man, our president, looked like f*cking Hitler. I’m not saying he’s Hitler. I didn’t even listen to a lot of his speech. He looked like a f*cking caricature. He looked like Hitler!" 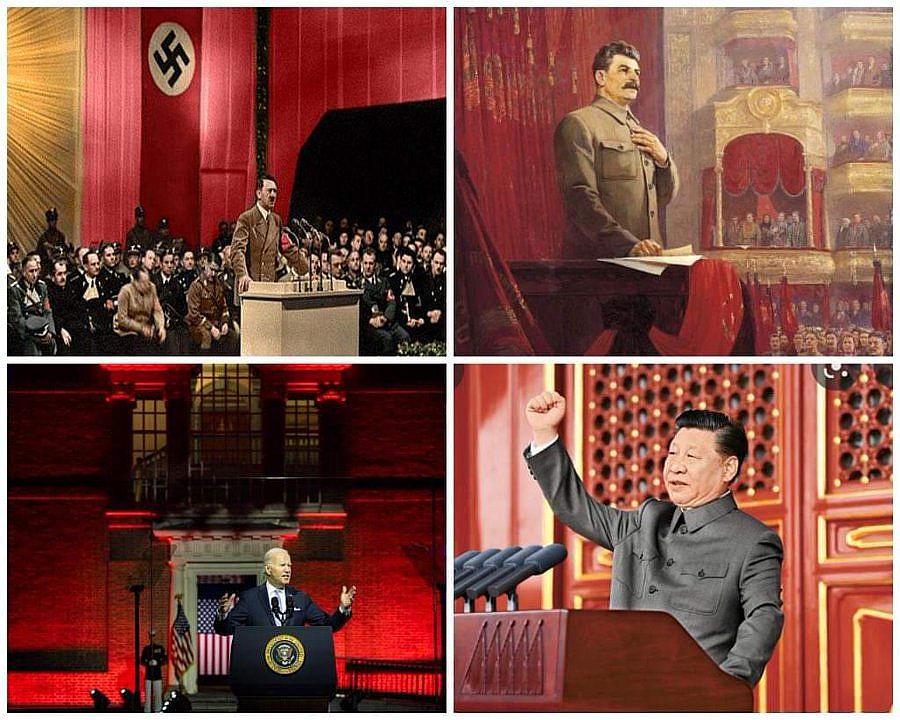 The questions, why this speech, and why now can be answered in two words, "the election." Democrats are polling terrible, so, Biden's intentions are threefold:

1. Paint Republicans as enemies of the state
2. Signal to violent street communists that violence is OK
3. Try to provoke a violent response from the right to justify a military crackdown

Biden made sure everybody got the word by repeating his libel on Twitter, and the other major social media platforms.

This was his enemies of the state speech, and like every other radical tyrant, he accused his opponents of being fascist, while he engaged in the oppressive, authoritarian language and behavior of a fascist, by accusing unnamed persons of hypothetical crimes:

“There are public figures today, yesterday, and the day before, predicting, and all but calling for, mass violence, and rioting in the streets.”

Who are those people, Joe? Are they Antifa and Black Lives Matter, Joe? Is it Jane's Revenge?

The Democratic Party has always had street goons they could call on when the need arose. Everything Biden accuses the Republicans of doing is standard operating procedure for Democrats, as this clip demonstrates.


Thomas Sowell said of Biden, "any politician who can be elected only by turning Americans against other Americans is too dangerous to be elected."

Ben Shapiro said, "that was the most demagogic, outrageous, and divisive speech I have ever seen from an American president. Joe Biden essentially declared all those who oppose him and his agenda enemies of the republic. Truly shameful."

Judicial Watch's Tom Fitton said, "Americans taken aback by Biden speech imagery. No one has seen anything like it in living memory -- at least in the American political context."

The "journalists" in the corporate media saw the speech differently. CNN correspondent Eva McKend lavished praise on President Biden’s "very, very patriotic" political speech in the "political battle between 'MAGA Republicans' and those supporting democracy," but one of the most outrageous came from The New York Times' resident "conservative," who let her Trump Derangement Syndrome run wild, before thinking better of it, and deleting this beauty. 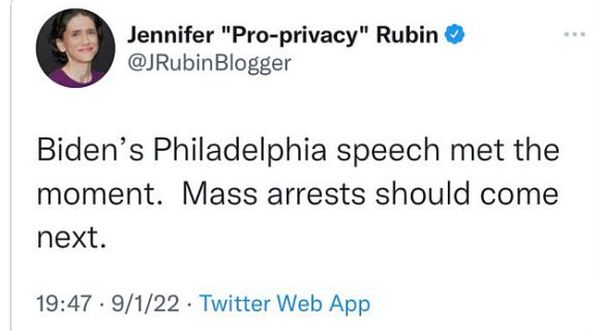 Biden's speech was a disastrous attempt to turn the 2022 midterm elections into a referendum on former President Donald Trump, instead of a referendum on himself, his terrible economy, and his WOKE agenda. Biden spent little time talking about the kitchen-table issues that are at the core of so many of the races across the country, and that are at the top of voters lists when they head to cast their ballot in November.

As far as Joe Biden's smearing "MAGA Republicans" as "extremists," goes, here are some issues:


Which column seems extreme to you?

Use the buttons to the left to send this page to your friends and associates . . . and thanks!