Thanks to @TimCast, a billboard is up in Times Square exposing what The Washington Post did to @LibsOfTikTok. pic.twitter.com/y7MwrqGGZd

Taylor Lorenz is the perfect liberal -- a hypocrite, a liar and a whiner

Taylor Lorenz is a heavily opinionated and an outspokenly liberal-progressive reporter who left The New York Times for The Washington Post earlier this year. Lorenz is a strong believer in free expression, but only for herself and the like-minded.

Several days ago, Lorenz created a shitzstorm among social media users after doxxing the operator of the Twitter account, Libs of Tik Tok. Doxxing is the posting of the identity, home address, telephone number, and other very personal information on the Internet without the person's permission. It is frowned upon and against the policies of most social media websites. Here's Twitter's rule.

When the Washington Post’s senior managing editor released a statement defending Lorenz’s reporting, she declared that “we did not publish or link to any details about her personal life.” Not true, The Washington Post initially published a link to Lorenz's target's real estate license without an explanation or editor’s note. WaPo later stealth-edited Lorenz’s piece to remove the link. When pressed on the scrubbing of the link, the Post said that, “ultimately, we deemed it unnecessary.”

Even a woman who shared the same name reported getting death threats.

Lorenz, who is famous for blocking her critics on Twitter, revealed the identity of the previously anonymous woman behind the wildly popular Libs of Tik Tok, only a few weeks after complaining and crying on MSNBC, because, she claimed, she had faced online harassment herself.

In a segment that aired April 1 on MSNBC’s Meet the Press Daily, Lorenz whined and cried that she and her family faced criticism that caused her to experience “severe PTSD” and contemplate suicide.


I doubt Lorenz has any concept of what PTSD is, much less suffering its effects. What Lorenz has, is a double standard, which, of course, IS the standard for leftists.

Lorenz's article is nothing but a hit-piece, accusing her target of Q-Anon conspiracy theories and other liberal hallucinations. Lorenz is a typical crybully. She deserves all the backlash coming her way.

Earlier in the month, Lorenz tweeted that "doxxing, stalking, trying to hurt and smear ppl's love[d] ones, threatening them, it's not OK in any situation" -- except for the Libs of Tik Tok and any others with whom she politically disagrees. 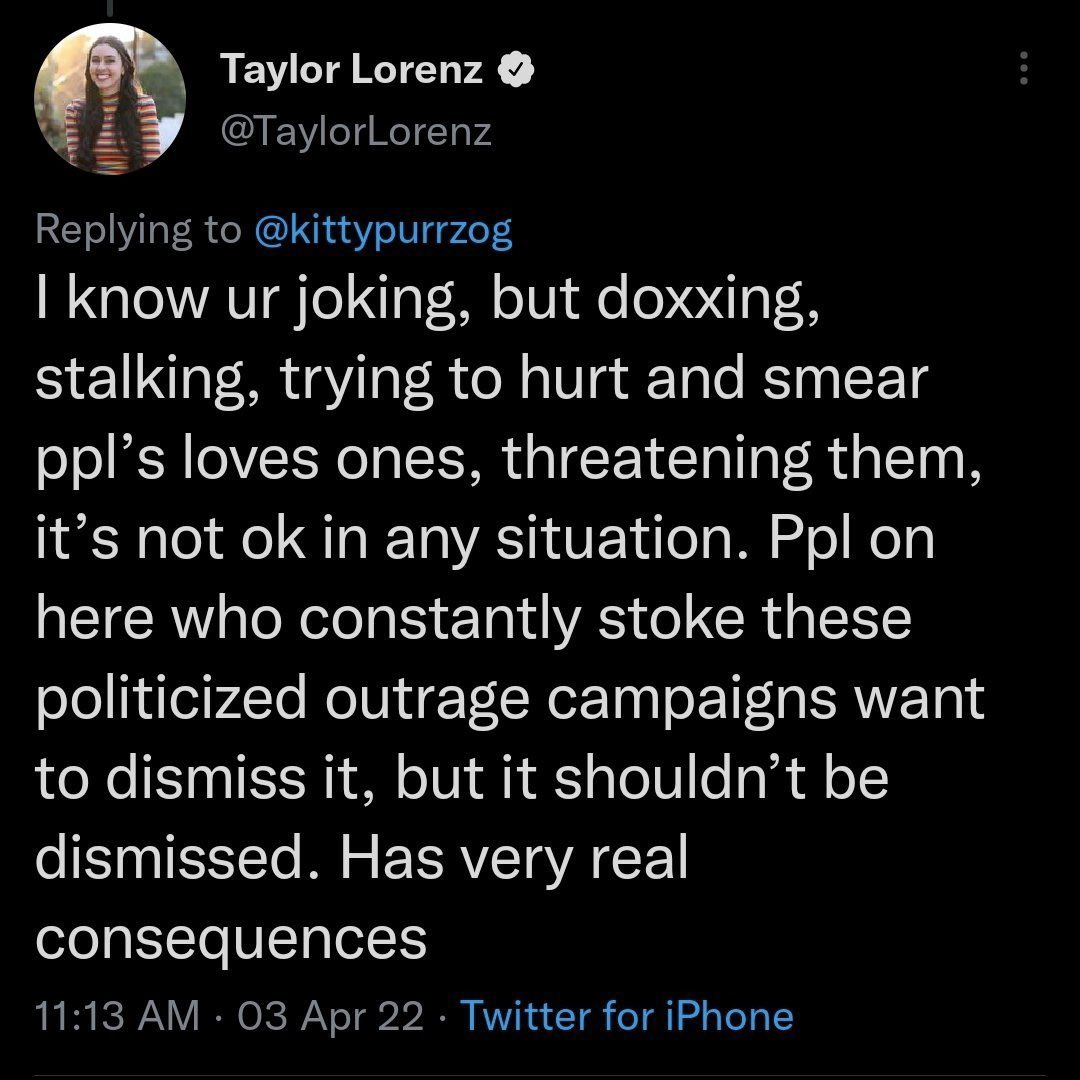 The shitzstorm Lorenz has created for herself is a terrific example of the Streisand effect, a phenomenon that occurs when an attempt to hide, remove, or censor information has the unintended consequence of increasing awareness of that information, often via the Internet. It is named after loony-tunes, Barbra Streisand, whose attempt to suppress the California Coastal Records Project’s photograph of her residence in Malibu, California, taken to document California coastal erosion, inadvertently drew greater attention to the photograph in 2003.

Libs of Tik Tok had 648,000 "Followers" when Lorenz wrote her hit piece. Libs now has 930,000 "Followers," adding 200,000 on a single day. Good job, Taylor! You have proven, once again, that leftists have no understanding of the Law of Unintended Consequences.

So, Lets take a look at what Lorenz believes Libs of Tik Tok is doing that is so horrible and such a threat to the alphabet community, by examining one of the tweets that has her panties in a twist.

Lorenz writes, "On March 8, a Twitter account called Libs of Tik Tok posted a video of a woman teaching sex education to children in Kentucky, calling the woman in the video a 'predator,'" and adds, "Libs of Tik Tok reposts a steady stream of Tik Tok videos and social media posts, primarily from LGBTQ+ people, often including incendiary framing designed to generate outrage."

You watched the video. What do you think? Is reporting what this degenerate has to say an attack on the alphabets, or is it exposing a Pedocrat? Because Lorenz charges that posting this video is an attack on LGBTQXYZ people -- and that's just a lie. Groomer lady references "young" people, not "gay" people.

It's what leftists do. It's the same with the Florida law protecting children who have not reached the age of reason from sexualization. The Left refers to the law as the "Don't say gay" bill. The bill doesn't contain the word "gay" or any of the growing number of genders. They lie, then attack, then lie some more and continue the attack. They have no respect for the truth. They deeply believe the end justifies the means -- any means.

What really upsets Lorenz is, "the anonymous account’s impact is deep and far-reaching. Its content is amplified by high-profile media figures, politicians and right-wing influencers. Its tweets reach millions, with influence spreading far beyond its more than 648,000 (now 930,000) Twitter followers."

That's what bothers Lorenz. Libs of Tik Tok has traction. It has people's attention -- and you know why -- it's exposing the Left's massive queering agenda -- with their own words and actions.

She continues, "Libs of Tik Tok has become an agenda-setter in right-wing online discourse, and the content it surfaces shows a direct correlation with the recent push in legislation and rhetoric directly targeting the LGBTQ+ community."

Again the lie. That is clearly not what Libs does. All Libs is doing is pulling back the curtain, exposing people like this Pedocrat.

"Let's not talk about the morality of the [predator's] attraction," he says. Instead, let's invent an euphemism -- "minor attracted person, or MAP -- and like magic, a felony becomes a misdemeanor. Assault and battery are now a parking ticket. In the leftist's mind, there is nothing so horrific that it can't be rationalized and justified. It's who they are.

Bottom line, Taylor Lorenz and the Washington Post are intending to incite violence against a woman for the crime of operating an anonymous twitter account because they fear her. WaPo and Lorenz both know that Libs of TikToks has received death threats from AntiFa.

Odd, isn't it! Twitter has no problem with death threats as long as they are directed at the right people, but don't you dare say that Adm. Rachel Levine is a man, not a woman, or you'll be off Twitter in a heartbeat.

Lorenz is now promoting a viral initiative called the "Coalition Against Online Violence," that claims on its website, "Women journalists face online violence simply for doing their job. These online attacks have very real consequences, both for the journalists themselves and for freedom of expression." What absolute rubbish. It's the old leftist one-two.

What Lorenz doesn't want you to know is that there are teachers all over America that believe it is their life's mission to convert your kids to a lifestyle that is well documented to be a high risk one. Here's one of them. He has no problem driving a wedge between children and their parents.

“If your parents don’t accept you for who you are, f*** them. I’m your parents now” - Oklahoma middle school teacher

This teacher was let go last week after complaints of grooming and this tiktok + others containing questionable content were brought to the principal’s attention. pic.twitter.com/eBgAWCW3K7

This is why the "child protection" laws that are being written NEED to be written.

Taylor Lorenz and the Washington Post oppose the rights of the parents and support the rights of the groomers and Pedocrats. There is no question. Their motives may be different, but they arrive at the same place. So, they must destroy Libs of Tik Tok and they will use any lie to do it, and Lorenz is a magnificent liar, but if you criticize what she is doing, she is going to cry like a baby.

In closing, I would like to state my own position on all of this. I don't care what adults do with or to each other as long as they cause no harm, but if you come near my grandchildren or great-grandchildren, you are going to have a big problem.

And I don't care if you or straight, gay, or anything in between.