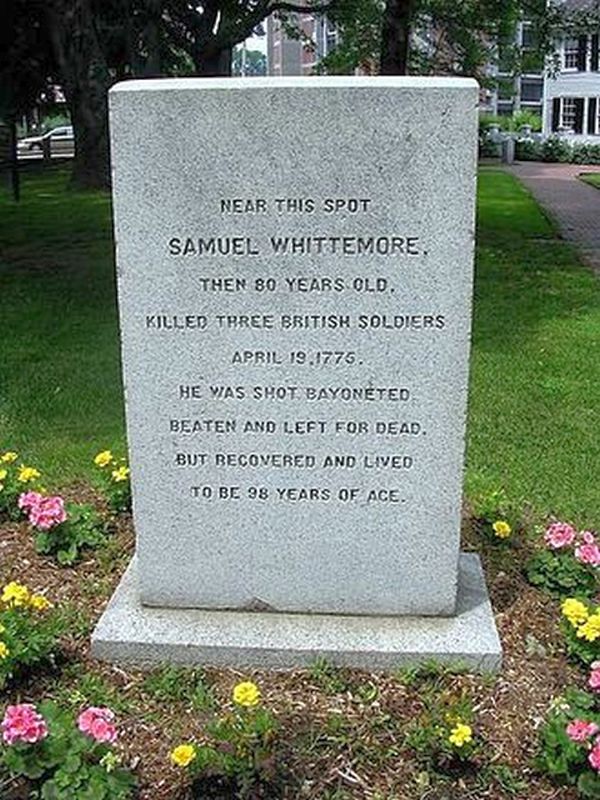 On April 19, 1775, British soldiers, retreating from the Battles of Lexington and Concord, left Samuel Whittemore in a pool of blood alongside a stone wall in Menotomy, Massachusetts. They had shot the 78-year-old old farmer in the face. Then they bayoneted him -- at least six times -- and beat him with the butts of their muskets, leaving him for dead. 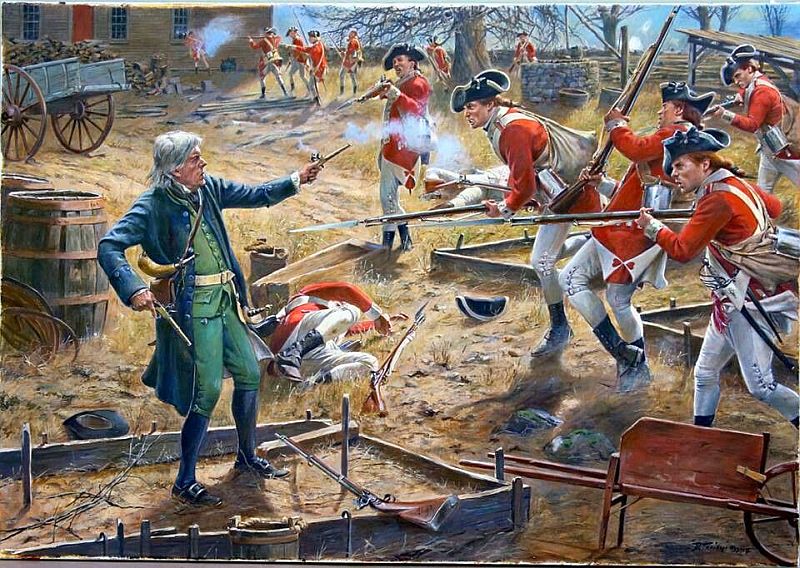 When his family found his body, they thought he was dead, but a doctor patched up old Samuel and the 78-year-old lived -- for another 18 years.

Samuel Whittemore was born on July 27, 1696 in Charlestown, Massachusetts, to Samuel Whittemore and Hannah Rix. He had some education, married twice, had a daughter and farmed land in Menotomy, then part of Cambridge, now Arlington.

Whittemore was no spring chicken when he fought the French in Canada. He had reached his mid-40s when he enlisted as a private in Col. Jeremiah Moulton’s Third Massachusetts Regiment. Whittemore participated in the capture of the French fortress at Louisbourg in 1745. During the battle, he captured an ornate sword from a French officer, which hung over his mantle for many years.

Samuel then volunteered during the French and Indian War, again fighting the French in Canada, and, in 1763, at the ripe old age of 67, he led troops against Chief Pontiac in the Great Lakes region. During hand-to-hand combat, the legend goes, Samuel Whittemore took a pair of dueling pistols from an opponent he bested.

The Town of Cambridge, to which Menotomy belonged, elected him to a committee in 1768, after the repeal of the Stamp Act. That same year, Cambridge elected him as a delegate to the Massachusetts Committee of Convention, which objected to Parliament’s revenue acts and the quartering of troops in Boston.

Then came the battles at Lexington and Concord. News traveled fast throughout the countryside, and 5,000 militia men from nearby towns came to harass the British as they retreated to Boston.

Samuel Whittemore left his field in Menotomy, gathered his musket, his two captured pistols, and the French ceremonial sword, and went -- one more time -- to defend his America. He positioned himself behind a stone wall along the road of the retreating British and waited.

When the British regiment passed by, Samuel Whittemore stood up from his position behind the wall, and shot point-blank at a British regular with his musket. As the Regulars turned and advanced towards Whittemore, he drew his two dueling pistols, and shot two more soldiers dead.

The old farmer then grabbed his ornamental sword to fend off the British soldiers who swarmed over him. It didn’t go well. The Regulars shot him in the cheek, bayoneted him, and beat him with the butts of their muskets.

That he recoved is truly a miracle.

Samuel Whittemore then fades from the historical record until his death on Feb. 2, 1793, at the age of 96. He was laid to rest in the Old Burying Ground in Arlington.

The Massachusetts Legislature declared him the official state hero in 2005, though the Senate got his age and dates wrong in the proclamation.