Wanted By The FBI 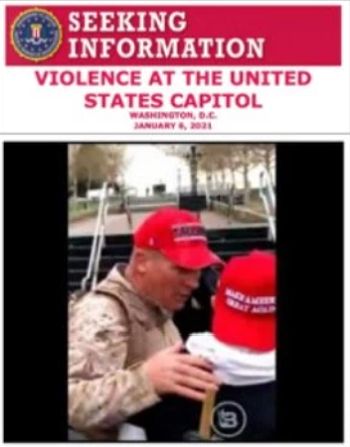 EXCLUSIVE: Ray Epps Told FBI He Expected a Bomb Attack Near the Capitol on January 6
https://t.co/WucuwWLZOt

Who Ray Epps is, is well known. Epps, 60, is a former US Marine and former Arizona Oath Keeper. He was a jock and played BBall with the Golden State Warriors for a few unremarkable seasons. He currently operates a ranch and wedding chapel in Arizona.

What Ray Epps is and what he was doing in Washington DC on January 6, 2021, however, has become something of a mystery.

Deathship's very deep dive into Epps and Jan 6. provides documentation that clearly demonstrates that out of all of the thousands of January 6’s protesters, and the thousands of hours of publicly available footage from that fateful day, Ray Epps has turned out to be the only person who is on multiple video clips, repeatedly and loudly agitating protesters to "go into the Capitol." On both January 5th and January 6th, Epps shouted multiple times, at multiple locations, his intention to breach the US Capitol. He then spent hours attempting to recruit hundreds of others to join him. When the rush to the Capitol began, Epps was seen leading key people and managing key aspects of the initial breach of the Capitol grounds himself. Oddly, Epps never went inside the Capitol?

In the following video, Epps is seen repeatedly encouraging protesters to "go into the Capitol" and then we see Epps with the protesters who were elements of the very first breach of the Capitol barricades. At 12:50 p.m., while Trump was still speechifying, Epps whispers something into the ear of Ryan Samsel, who has been charged as one of the first defendants to breach secured Capitol grounds, and off they go!

Oddly, Epps, who breached the barricade with the others, disengages and never enters the Capitol. Epps, the man who did more than any other to incite the assault into the Capitol, never stepped foot inside the building.


Revolver News and The New York Times published several inconvenient stories that encouraged a more aggressive investigation of the “Ray Epps third rail.” These reports led reasonable people to wonder why an individual who was publicly pictured and identified on an FBI handbill with the words, "Seeking Information" and "Violence At The United States Capitol," still had no charges filed against him.

The FBI responded to these important media stories by quietly purging all FBI online references and images of Ray Epps from the Internet. The FBI then pivoted to a posture of, “Ray Epps? Never heard of him.” 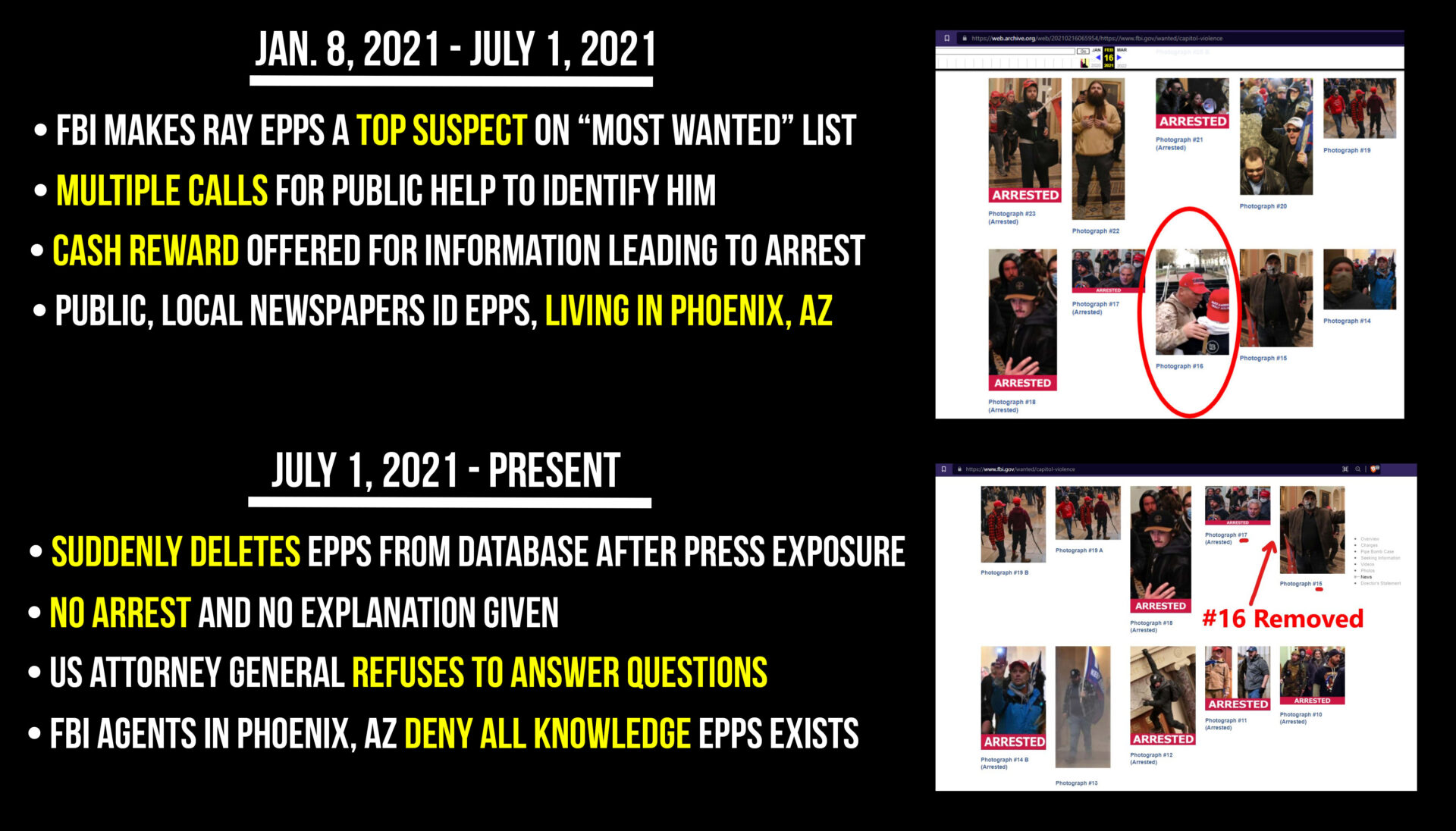 Agents of the FBI Field Office in Phoenix (where Epps lives) have gone so far as to explicitly deny that Ray Epps even exists -- and the "we know nothing" chorus is not just among field agents. It goes all the way to DC.

The FBI sent the Executive Assistant Director of the FBI, Jill Sanborn, who has 20 years experience in counter-terrorism, to face a congressional inquiry. Her instructions were quite simple. "No matter what they ask you, you are to respond, 'I can't answer that'."

The FBI Stonewalls The Senate


She performed magnificently, proving that "The Untouchables" is really just a TV show.

The DoJ Stonewalls The Senate


Olsen's job description says he is tasked with leading the Department of Justice’s mission to combat terrorism, espionage, cyber crime, and other threats to the national security.

The guy that's in charge of our national security refuses to answer a single question directed towards him, but he's the guy that, by his job description, is supposed to know it all (and he does), but he has his orders too, and they are the same ones the DoJ gave Jill Sanborn -- play Mickey the Dunce -- so he did and gave Cruz nothing.

Rep. Massie (R-KY) asked the Attorney General of the United States if there were any federal agents or informants at the Capitol, and Garland responded with the standard, "we don't talk about ongoing investigations" bullshit. Massie pressed Garland, but Garland refused to answer anything.

The Attorney General Stonewalls The House


Should we be surprised at this behavior from the people that exist to protect ALL Americans? Not if you understand that the Attorney General of the United States of America is more than just a Democratic. He's a political activist. AG Garland colluded with the National Association of School Boards to establish a narrative that the white parents of America's school children were "domestic terrorists." This parallel conspiracy, against Trump's supporters, provided Garland with an excuse to stand up a brandy-new unit within the DoJ that would, for the first time in the 250-years history of the United States, hunt down "domestic terrorists" -- whether they exist of not.

What we are watching is political theater, evolved to high art by the Democrats. We saw it in the impeachment of President Trump. Now, they are laying the groundwork for round #2, federally prosecuting Trump for what they say is his role in the "insurrection," but the Donks still needed to rehabilitate loose-end Epps before they could refer Trump to the Justice Department (Garland) for criminal prosecution.

The "rehab" began during an "interview" on Friday, January 21, 2022, by members of Chairman Bennie Thompson's Jan. 6 Star Chamber. The meeting took place at the law offices of criminal defense attorney, John Blischak, a former FBI agent, who is representing Epps.

Well now, isn't that a coincidence? Epps, has segued from being wanted by the FBI, to being represented by a former FBI agent, who is listed as one of the "premier lawyers of America, and who advertises his biggest asset as "his relation with prosecutors and law enforcement in ways other lawyers cannot because of his background."

It cannot be denied that Epps is an "agent provocateur." The question is, was he an independent person acting on his own or was he acting on behalf of the Democrats or the federal government. If Epps was an agent, all everybody has to do is to get their stories straight. If Epps was truly independent, it seems he might be presented with an "offer he can't refuse" -- prison or a bag of money -- to say he was tasked by President Trump to foment an insurrection. Not possible? You haven't been paying attention.

Democrats can be confident that Chairman Thompson's "review process" will ensure that any information damning to Democrats, DoJ, or FBI is edited out of the transcript and information damaging to President Trump, Republicans or other conservatives is amplified and highlighted. However, the primary goal of the exercise is to absolve Epps of any crime and destroy any possible links between Epps and any individual or agency related to the federal government and to provide a plausible cover story for why Epps was never arrested and tried for his participation and actions.

The final act of this conspiracy is to package and present the Democratic Party's version of the events of Jan. 6 to the American public as the worst domestic event since the Civil War. To ensure Americans are propagandized to the Cinemax and to paint the incident as a thousand times worse than the reality, the events leading up to and at the Capitol are poised to get the Hollywood treatment, as the subject of a "harrowing and terrifying" feature film being produced by Adam McKay, Will Ferrell's partner.

Director, Billy Ray, said,"It’s about protesters who became rioters and cops who became defenders of democracy." Ray, is best known as the writer behind the Showtime miniseries The Comey Rule, the political drama that pitted ex-FBI director James Comey (Jeff Daniels) against President Trump (Brendan Gleeson). The series was adapted from Comey's book, so you can be sure it was "very unfair and very unbalanced." For some reason, I missed it.

All of this effort and subterfuge exists for only one reason, The Democratic Party is absolutely terrified that Donald J. Trump will be re-elected in 2024. They know they took advantage of Trump's political naivete. No one could have imagined or predicted the viciousness and deceitfulness of the Democrats' game. Should Trump return to Washington, the Donks know they would be facing a different man. They would be facing a very pissed-off guy looking for political retribution. A second-term President Trump would dismantle the Democratic machine. They know it and it's their worst nightmare. It makes them incredibly dangerous. They are liable to do anything, including going to war with Russia over Ukraine, if that's what they think it will take.