The Pulitzer Prize is between a rock and a hard place

Joseph Pulitzer stood out as the very embodiment of American journalism, say the historians. His innovative New York World and St. Louis Post-Dispatch reshaped newspaper journalism and his Pulitzer Prizes left lasting influence of on journalism, literature, music, and drama -- at least until now.

In journalism, Pulitzer Prizes were to recognize public service rendered by an American newspaper, the best editorial and the best example of a reporter's work during the year. The test being "strict accuracy, terseness, the accomplishment of some public good commanding public attention and respect."

These are the folks that awarded the Pulitzers for the Trump-Russia stories. They only sat on the board for that one-year term. So, the people that selected the prize winners, and set this drama in motion, are long gone, and even the atheists among them are saying, "thank you, Jesus!"

Just so you understand the mindset of these people, here's a little clip featuring the guy they sat up front and in the middle (liberals are so predictable). The Washington Post's Eugene Robinson, who was the 2017-20118 board chair, uses the events at Charlotte (NC), to display the mindset of the committee and slander the former president.


To paraphrase the chairman, "This is who Eugene Robinson is." Do you think he had any influence over the 2018 decision-making process?

So, anyway, that bunch selected this bunch. Most of them know each other' They went to the same schools, worked for the same employers, played golf at the same clubs, and drank at the same bars, and -- coincidence of coincidences -- they all subscribe to the same ideology.

Make no mistake, their selection is a very, very big deal for these folks. With the Pulitzer came the accolades from "journalism," their peers and the nation, not to mention $15,000.

These folks love being a Pulitzer Prize winner -- and who wouldn't. It's like winning the Lombardi Trophy for "journalists" -- and the parties! They get invited to all the best parties, often as the guest of honor. They don't want to lose that, and they damn sure don't want to write a check for 15 Large. 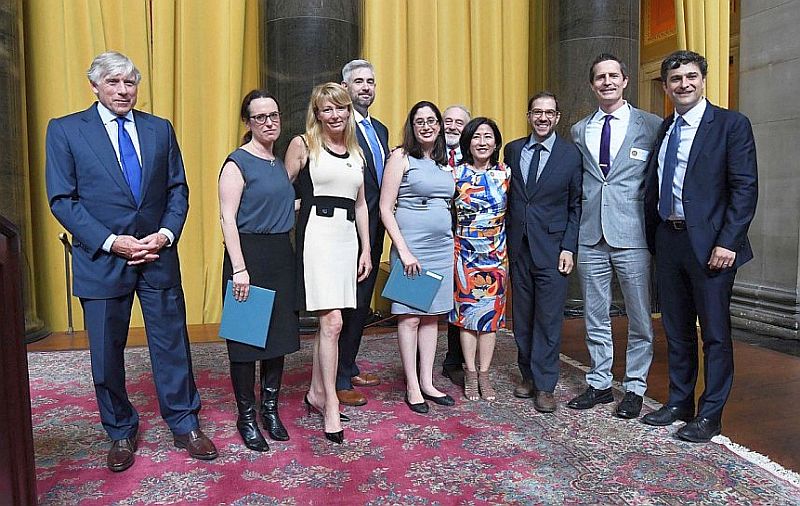 Who knows what a Pulitzer would be worth, down the road -- six figures easy -- more likely the low seven. If those Pulitzers were recalled, all that goes away and the Pulitzer organization's stain could very easily tarnish the prize winners. These prizes could easily be a huge negative in their careers.

Again, so we understand where these people are coming from, and to demonstrate my randomness in selection, I present this short clip from one of the prize winners -- the one that's up-front, and in the middle.


The Washington Post's Rosalind Helderman shows us how these folks refuse to recognize Russiagate and acknowledge their participation in the greatest political hoax in American history. If they don't acknowledge it, it didn't happen. Helderman, like most Democrats, is still focused on finding some way -- any way -- of punishing Donald Trump and his supporters -- for something -- anything!

These are the guys that are sitting on the Pulitzer Board right now. They hate where they are. These people are wondering why they fought so hard to get on the Pulitzer Board in the first place. Their lives are being turned upside down with the controversy -- and now Trump is threatening to sue.

So, they'll do the adult and responsible thing and ignore the situation, pretend it doesn't exist, pray it goes away and try to stay out of the country until the new board is installed -- but they're not changing their minds about Mr. Trump.


The arrogance and condescension just flows from Gail Colllins, The New York Times opinion writer, and this year's chairperson, as she speaks for all of New York being humiliated for having sent Trump out into the world.

There are 47 people, either on the above mentioned boards or prize winners. Every single one of them despises Donald Trump. It is the bona fide required to be a member of this exclusive club.

Yet who are these people? They are salaried people. They work for a living. Not one of them ever met a payroll. They have zero concept of what that even means. yet, they talk about an American president, who had been one of America's greatest businessmen and builders, with 500 companies and a #1 TV show, like he is something you scrape off your shoe.

Their hatred of/for Donald Trump is visceral -- but why? What is his great crime?

They will never, ever forgive him for that sin. They can't. These people had been working for 25 years to put Hillary Clinton into the Oval Office -- and there she was -- at the front door, only to be brushed aside by what they see as that boorish lout from New York.

Now that Trump was in office, he had to be destroyed, and these are the people that set out to do that, but now, it's time to pay the Piper.

President Trump, correctly, wants the Pulitzer Prize board to rescind the awards it gave to the newspapers and the "journalists" for their reporting on Russian interference in the 2016 election, and Trump is threatening to bring suit if the Pulitzer board does not.

The Pulitzer people will pretend this problem doesn't exist until Trump forces them into court. and this bunch knows it will be the next Pulitzer Board that will have to deal with it -- and during a presidential election. That could make it difficult to seat the Pulitzer Prize Board for 2023-2024.

The suit will generate a lot of press during Trump's 2024 campaign and the lawsuit -- Trump beating up the press, for a change -- will only help.