Joe Biden's revolution has been brought to you by Barack Obama


You can say what you want, but Joe Biden has a history. Biden was 30 years old when he was first elected and sworn into the Senate in 1972 -- that's 50 years. For 48 of those years, Biden was a good old boy who was best know for being on both side of every issue. In those 48 years, no one ever hung the label "socialist" or "revolutionary" around his neck. Yet Joe Biden has been behind the greatest revolutionary change in the federal government since the founding of the country.

The very first thing that Joe Biden did -- on day one! -- was to sign an executive order (EO), "Executive Order On Advancing Racial Equity and Support for Underserved Communities Through the Federal Government," establishing the concepts contained in Critical Race Theory and Queer Theory as the official policy of the federal government.

Biden's "Equity Plan" is breathtaking in its audacity and scope, and I truly believe Joe Biden doesn't know what half of the words in it mean -- and where the hell did it come from? Joe Biden hadn't been out of his basement in the eighteen months of the campaign, and boom! -- there's a finished 2,000-word, detailed plan in place, and all ready for the new president's signature.

That the plan was introduced by Obama's right-hand-woman, Susan Rice, who is now in charge of the Biden administration's domestic policy, and is directing the plan's implementation, provides us with a clue to its source. 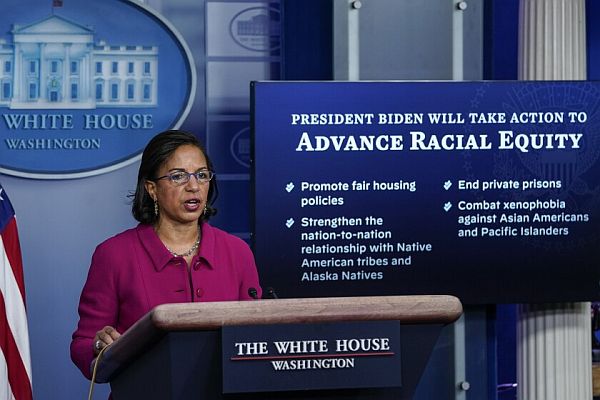 What can be seen by reading the damned thing is that it was not written by a real, re-blooded, American, but a cabal of commies. There's no doubt about it, and they have absolutely no interest in advancing anything but left-wing causes, organizations and protected classes. The billions and billions of taxpayer dollars that are being disbursed, and that will be disbursed, from government coffers never end up in the People's hands, but to to left-wing interests, that continue to work towards socializing every aspect of American life, and if you resist you'll get tagged as a "domestic extremist."

Establish the narrative and destroy the political opposition

Right after signing that executive order, Biden directed his national security team to lead a 100-day comprehensive review of U.S. Government efforts to address domestic terrorism, which, according Joe Biden, has evolved into the most urgent terrorism threat the United States faces today. As a result of that review, the administration released America's first-ever, "National Strategy for Countering Domestic Terrorism," on June 15, 2021, less than 180 days after his swearing in. This document defines what "domestic terrorism" is and who "domestic terrorists" are, those racist, anti-government ideologues -- those evil "MAGA Republicans" -- his political enemies. 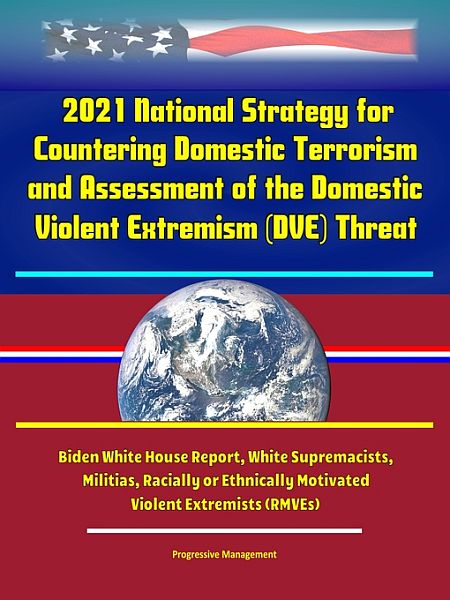 After 20 years of building the United States into the world's preeminent and deadliest weapon against terrorism, the Biden administration will upgrade the FBI's systems, and spend $200 million more in 2022 to spy on and hunt down its own citizens.

Some folks might think that's a little overkill. According to figures compiled by the Defense Department, the U.S. invasion of Grenada only cost $134.4 million, but the goal here is to end Trump and MAGA forever and defend the Equity Plan. What appeared to be a series of unrelated events belie a very clear strategy.

Identify and target the extremists

The first operation phase was to create the predicate for the follow-on operations by conducting a false flag operation in which the DoEd, the NSBA and the DoJ conspire against The People.

One year ago last Thursday, on September 29 2021, the National School Board Association (NSBA) sent a now infamous letter to Biden requesting the deployment of law enforcement against parents who were speaking out at their local school board meetings [about CRT in school and transgender rapes in the girls lav]. The NSBA wanted parents to be federally investigated, saying school officials were facing threats and violence at meetings, and -- most significantly -- the NSBA requested that parents' actions should be examined under the Patriot Act as "domestic terrorists."

Then, on Oct. 4, Attorney General Merrick Garland issued a personally-signed memorandum instructing the FBI to collaborate with state and local leaders to address "threats against school administrators, board members, teachers, and staff." He went on to say that this collaboration "will open dedicated lines of communication for threat reporting, assessment, and response."

An independent review revealed coordination between the NSBA and the Biden Administration in producing the letter, as well as significant internal strife among board members about how this was handled -- and why it was done in the first place.

That the NSBA conspiracy blew up in their face didn't stop Garland's DoJ for a single day. They just kept marching as though nothing had happened, and went on to the next phase. The DoJ simply swapped out "extremist moms and dads" for "MAGA Republicans."

Build the cases against the extremists

The focus of Olsen's "investigations" won't be Black Lives Matter or Antifa, whose "mostly peaceful protests" accounted for at least 25 deaths, injuries to 2000 law enforcement officials and an unknown number of civilians and $2 billion in damages. No, the focus of Biden's supremacist-hunters are Donald Trump and his supporters.

On June 23rd, the FBI conducted what I believe to be the first of the now infamous "FBI raids," when FBI agents staged a pre-dawn raid on the home of Trump DoJ official, Jeffrey Clark, who was forced into the street in his underwear. This was the "test case" for the subsequent raids. 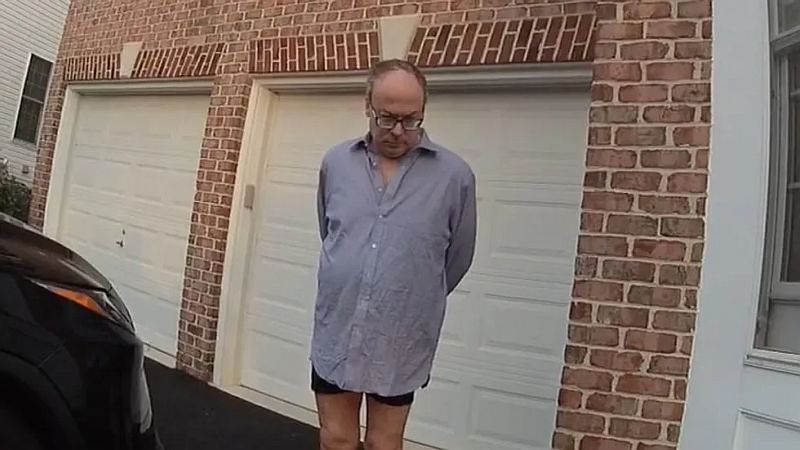 Jeffrey Clark was an Assistant Attorney General of the United States of America, and here the FBI has him in his underwear, handcuffed in his driveway for all his neighbors to gawk at. The media ate it up!

The Intercept opined that the raid was significant because it provided a tentative sign that the Justice Department was finally conducting a criminal investigation into Trump and his allies for their attempt to stage a coup, but the fact is, this was the first FBI raid against an American on a "speculation" -- and there would be more to follow.

The July 4th weekend would have brought Barack Obama to Martha's Vineyard for "the season," and the ideal place from which to oversee "the Big One," the raid on a president. 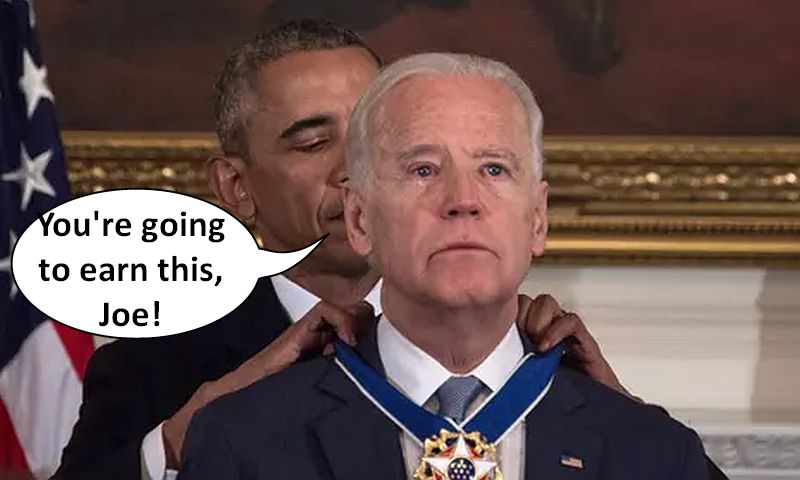 On August 8, 2022, at least 30 FBI agents and 3 DoJ officials conducted a raid on the private residence of President Trump at Mar-a-Lago in the dark of night.  The predicate for this raid was a media report from "unnamed sources," alleging President Trump stuffed classified papers down a toilet.

The FBI spent hours in President Trump’s private office, and searched every room in the historic home. As the day wore on, the FBI forced Trump's attorney, Christina Bobb, to sit outside in the 91-degree heat, and would not allow the lawyers to observe them ransack the former president's home. The FBI agents even searched through Baron's room and belongings and to pile on the insult, trashed former first lady Melania Trump’s wardrobe and left it a mess.

On September 8th, former Trump advisor, Steve Bannon was charged with six felony counts, to include money laundering in the second degree, scheme to defraud in the first degree, and conspiracy in the fourth and fifth degrees, but to rub salt into Bannon's wound and further humiliate the man. the Southern District of New York's prosecutor had Bannon perp-walked into the federal building in handcuffs -- a totally unnecessary precaution -- Bannon voluntarily showed up with his lawyers. They just had to have the pictures. 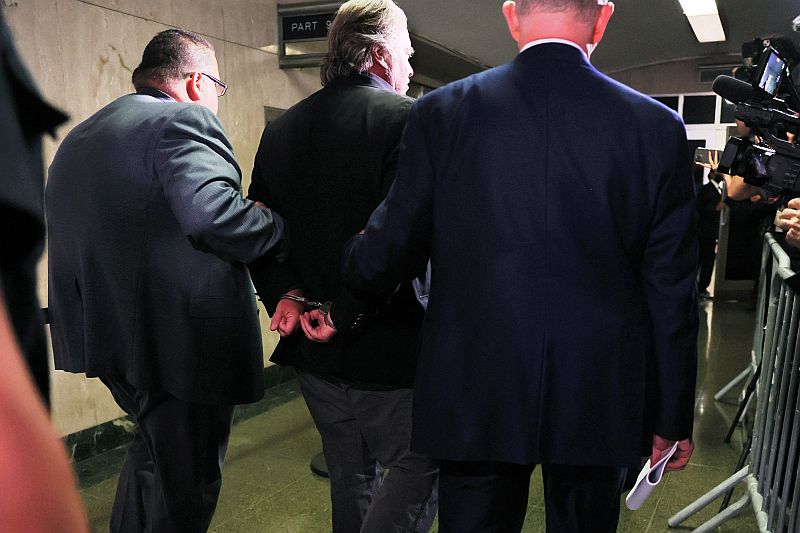 The FBI has followed up on the arrest of Steve Bannon, with raids on the homes of as many as 35 major Trump supporters across the country, seeking documents and other artifacts, most of which are protected by the 1st and 4th Amendments. The FBI even followed Mike "The Pillow Guy" Lindell for two-hours before stopping him and arresting his phone.

The majority of the FBI's "targets" are individuals engaged in the investigation of election tampering in the 2020 election, and every one of the " targets" of this unprecedented sweep have lawyers. Someone at the DoJ could have easily called each of them. They would have presented themselves with their lawyers, but then there wouldn't be the pictures -- a key to managing the message of intimidation. 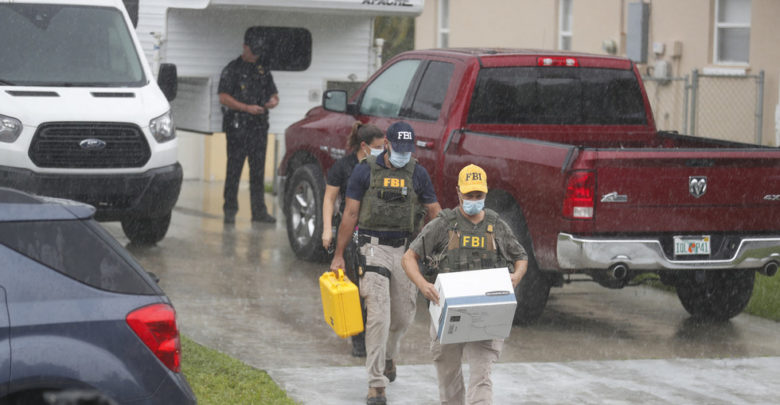 None of these people have been charged with a crime. None of these people have been tried for a crime, and none of them have ever been convicted of a crime, beyond being labeled a "MAGA Republican" and a supporter of Donal Trump. The worst part for the feds, is that Biden's extremist hunters have had an extremely difficult time finding the extremely elusive "domestic extremists" -- and they've been looking everywhere!

Current and former FBI agents are telling anyone that will listen that the white supremacist threat is way overblown by the administration. They said top bureau officials are pressuring FBI agents to create domestic terrorist cases and tag people as White supremacists to meet internal metrics. He said: 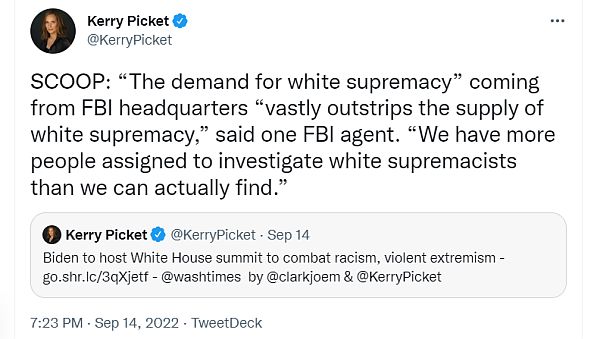 The agent said FBI officials “have already determined that White supremacy is a problem,” and have established an FBI policy to prioritize racially-motivated domestic extremism over everything. If you don’t conform to the "extremists" narrative, you’re the enemy. Agents who question the Biden administration's manipulation of the narrative are silenced.

All of this stuff is happening inside of Merrick Garland's Department of Justice, the last department you would expect such flagrant misuse of the law.

Joe Biden does his part and slanders his fellow Americans

While the FBI was running amok throughout the country, Joe Biden made his now famous "Red MAGA Speech." Flanked by uniformed Marines, and bathed in dramatic light, he delivered an address to The People,warning them that his political enemies are their country's enemies, and that MAGA Republicans are threats to their democracy.


President Biden's speech was the speech of a dictator, in the style of a dictator, using the words and visuals of a dictator. He doubled down a week later. Speaking at the "United We Stand" convention, promising that, "White supremacists will not have the last word."

The Jan. 6 Committee was scheduled to meet last Wednesday to tie everything together and present their "findings" to America. It was to be the final act, in which the committee would connect Trump and the MAGA Republicans rounded up by the FBI, to the the January 6th "insurrection," and claim that all of this fantasy is a great MAGA conspiracy to overthrow the government, and urge the filing of charges against president Trump -- but they were hurricained out, by Hurricane Ian.

Biden has spent tens of millions on this project, to the neglect of the crime that is out of control all across America. This is Trump Derangement Syndrome on crack, and like that crackhead, they are not going to stop. They can't stop! This is the final act of Obama's "fundamental transformation" playing out. Obama has to be pushing Biden, who barely know where he is, hard. This is make it or break it for Obama. It's his last stand.

From all forecasts, the Democrats are expected to lose control of Congress. The Supreme Court has moved right, and President Trump is clearly back on the campaign trail, and every stadium he visits can't accommodate the crowds.

There's 37 days to the mid-term elections, and the big question remains . . . what will the Democrats do? They must do something. What will Biden's "October Surprise" be, now that the Great Extremist Hunt of 2022 has yielded . . . bupkis!

Update: Rep. Thompson announced early Monday that Bennie and the Jets would be on TV this week. So, the Jan 6. Committee is taking one last shot before the election -- look for some outrageous allegations.