This photo should piss you off 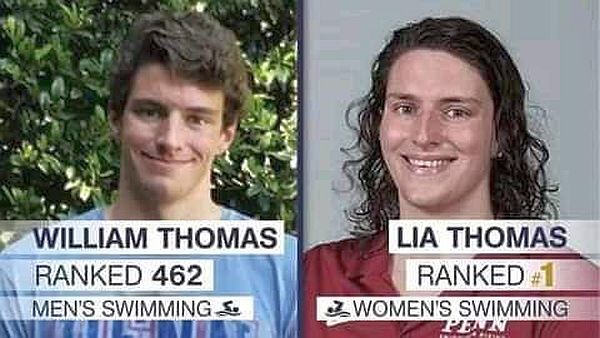 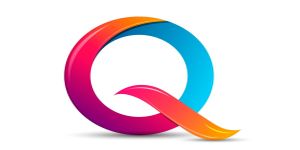 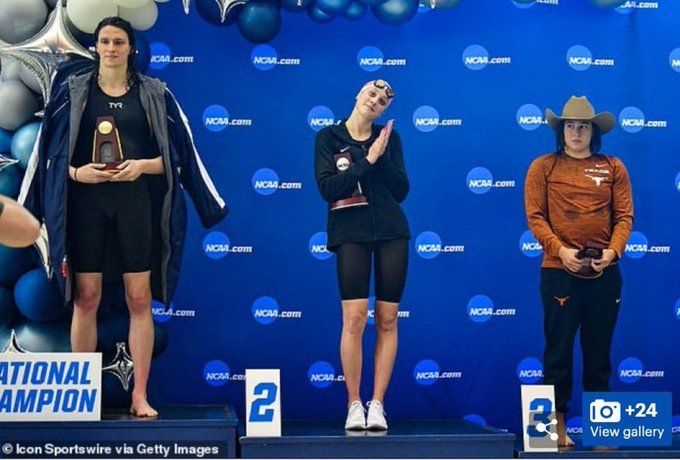 Women athletes are being forced to compete on a playing field that’s not even close to level, but they are ignored by the politicians -- in and out of sport -- and by the hardcore, dedicated radical trans activists, who proudly proclaim that science is on their side. It's not. The cold biological truth is that sex change is impossible. Every single cell of the human body remains coded with one's natural-born sex for life -- and after.

The irony is, this insanity is being leveraged by "fairness."

Yet, it is not fair that transgender ideology permitted William "Lia" Thomas to take a title and a trophy away from a young woman, but it's unfair because it's unjust, and it's unjust because it's based on a lie.

If this becomes the norm, it's the end of women's sports as we have known them. It's over. It's a simple as that. Men -- with or without their junk -- will be winning all the trophies and medals in women's sports. There's nothing fair about that.

The President of the United States is on board with the queering of America. Joe Biden has actually gone so far with this charade that he wants Congress to create a special class of American in the law for trans-people, especially kids. Joe likes kids.

I find Biden's "especially young Americans," remark a little unsettling. How "young" exactly are we talking about? The LGBTQXYZ "community" believes 5 to 8-year-olds should be subjected to sex and gender instruction. Is Biden willing to go that young? Some folks already refer to Joe Biden as the Groomer-in-Chief. That comment won't help. 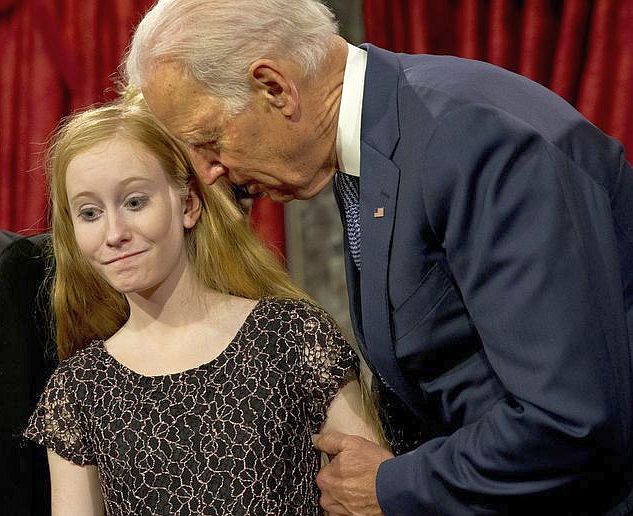 What used to be referred to as the grooming of children is now being supported media outlets as diverse as ESPN, an all-sports network. ESPN’s Elle Duncan is all bent out of shape because teachers can’t talk to 5 to 8-year-old children about their sex and gender identity. Elle and her associates are so upset, they plan on protesting after work.

Liberal parents can play the gender game too. Etsy is selling underwear to parents of male toddlers so they can "tuck" in their child's penis. This is to help affirm the idea that their boy is really a girl. A Portland (OR) hospital has a detailed guide to make sure the loony parent gets the tuck "just right."

Yup! Liberals are definitely out of their freakin' minds!

The psychosis is supported by congressmen, as well. Illinois congressman Raja Krishnamoorthi is very firm about the queering of America, tweeting, "in case anyone still needs this cleared up: Admiral Rachel L. Levine, MD is a woman." As fara as Raj is concerned, a guy who wore trousers and skivvies to work for 40 years and who decided to put on a dress one day, is now a 100% woman and the debate is closed.

And If you don't believe the congress-critter, you can certainly believe USA Today. It has named a guy, wearing a dress, "Woman of the Year!"

Levine is 100% male, yet USA Today lauds him as one of its "women of the year." That's just nuts! As Richard Levine, Rachel used to play football at Belmont Hill School (MA) with another piece of work, a young lad named Mark Milley, better know know as General Mark Milley. 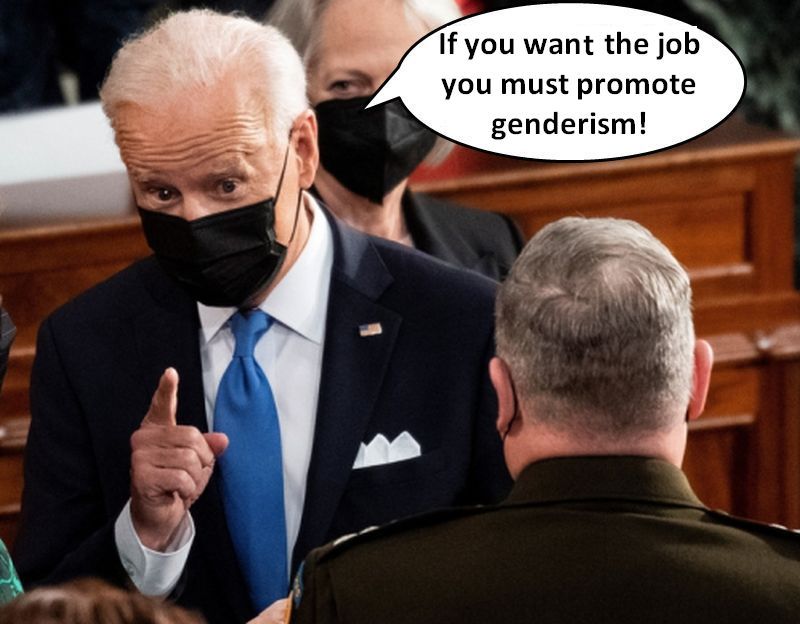 Milley, in his role as the Chairman of the Joint Chiefs of Staff, is all-in on the men-are-women-are-men psychosis and is overseeing its installation throughout the U. S. military.

Currently there are 1.4 million Americans in the U. S. military. The Pentagon says there are between 3,000 and 8,000 transgenders in service. That's less than .005 who are trannies, but the military will be turned inside-out for those "very special" few.

Harvard has a bunch of these lunatics deciding what the human race will be in the future at its Department of Human Evolutionary Biology. They "recognize that the history of research on these topics has been fraught, often feeding into racist and sexist ideologies."

With the mindset displayed on their website, these people would eagerly pursue a course that would eliminate humanity's problem gene -- the conservative white gene -- correcting what they see as a mistake of nature once and for all.

One hundred years ago, the idea, that six German shrinks could turn the American "can do" culture and the optimism of American people on its head, would have been laughable.

Fortunately there still are a few sane people in this insane world. Matt Walsh is one of them.

My personal positions on all of this trans stuff is:

1. No kids! Kids are off limits. If you're groomin' or didllin' kids, you should have your favorite parts nailed to a stump.

2. If you're over 18, I don't give a fig what you do as long as you don't hurt people or other living things. What you do is nobody's business but your own, and it shouldn't be.

Oh, and taxpayers shouldn't be paying for your whatever it is you got.

And now for the biggest question of all -- where are the women? 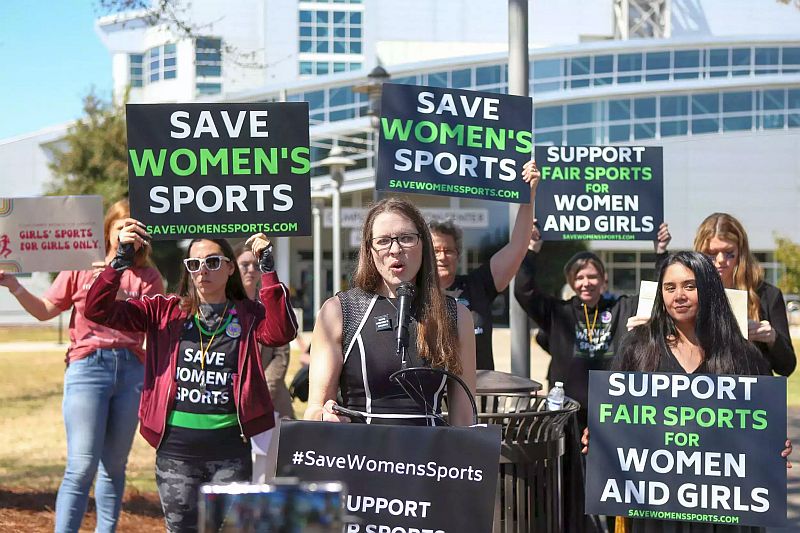 The women's movement managed to scare up 8 females that believe having men -- with or without their junk -- competing against real, live women is a bad idea -- not to mention it's no longer sport. It is no longer legitimate competition. Sadly, it has become politics -- lousy leftist politics.

C'mon, ladies! Get pissed! Do your thing!