For Filming And Mocking

Joe Biden is using all of the levers of the federal government to attack his political rivals by prioritizing what he calls "threats to democracy and domestic tranquility." Biden's list of targets include, "MAGA Republicans, election deniers, domestic extremists, and white supremacists” -- previously known as "average Americans."

Check out the bulletin. Most of the domestic threats listed are individuals and groups who questioned Biden’s policies, i.e., “Some domestic violent extremists have expressed grievances related to their perception that the U.S. government is unwilling or unable to secure the U.S.-Mexico border.”

So, if you have problems with Joe Biden erasing our southern border, and welcoming millions of who-knows-who, to do who-knows-what, you could be a domestic extremist -- but the killer is the warning about the continued proliferation of "false or misleading narratives." These are the same people who created and promoted Russiagate and manipulated the COVID information. Misinformation is THEIR game.

One of these false AND misleading narratives is the one that originated with the 51 former, senior intelligence officials, who signed on to a letter stating it was their personal belief that the crimes and perversions of Joe Biden's son, Hunter, discovered on Hunter's own laptop, and loaded with pictures and videos documenting Hunter's crimes and excesses, had "all the classic earmarks of a Russian information operation." 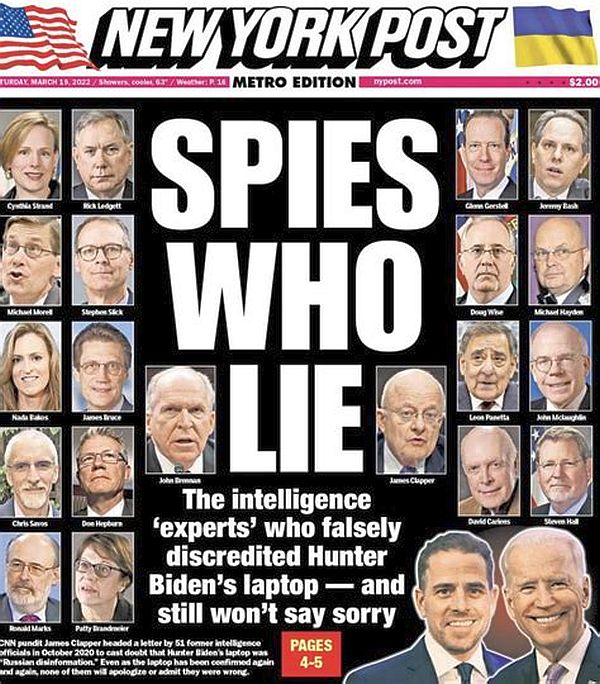 While the letter's signatories presented no new evidence, they said their national security experience had made them "deeply suspicious that the Russian government played a significant role in this case" and cited several elements of the story that suggested the Kremlin's hand at work.

"If we are right," they added, "this is Russia trying to influence how Americans vote in this election, and we believe strongly that Americans need to be aware of this."

That "misleading narrative" -- "the Kremlin's hand at work" -- that misinformation -- swayed a presidential election, and put Joe Biden in the Oval Office. Fifty-one of America's top intelligence officers put their imprimatur on what the world now knows is misinformation, and what the top signers of that letter knew to be misinformation when they signed that letter.

It's now all but forgotten -- especially by the FBI, which is dissolving before our eyes. The Untouchables have morphed into the STASI, the rogue security service that ran roughshod through Eastern Europe during the Cold War.

We no longer see news bulletins about FBI busts of the Mafia, or narco-terrorists, or Islamists. The FBI is far too busy arresting Joe Biden's personal enemies and citizens who have a problem with late-term abortions, or child molesters masquerading as teachers. What we see is the FBI has become the Biden family's Praetorian Guard.

In addition to politically suppressing the Hunter’s laptop drama on the eve of the 2020 election, the FBI never pursued Hunter’s fraudulently acquired and registered firearm, his mysterious foreign income, his money-laundering and payoffs, his felonious crack cocaine use, or his regular employment of foreign prostitutes -- the FBI never had any interest in the "hold 10% for the Big Guy" story, either.

Yup! When misinformation won't work for Team Biden, the entire federal government, and their pals in the media, just do a Sergeant Schultz. They ignores the issue entirely. 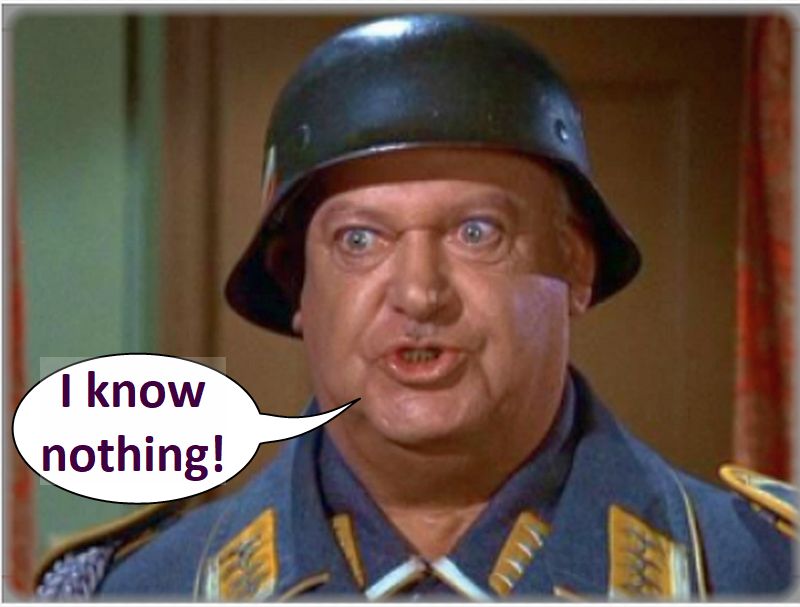 The ability of America's surveillance and intelligence services has evolved over the decades into a finally-tuned instrument for knowing more about everything than anybody.

I did a little training at the NSA Headquarters at Ft. Meade (MD) in 1972. My escort/shadow bragged about how NSA headquarters had longer corridors than the Pentagon. The building he was referring to is the five-story, gray one, at 3 o'clock in this picture. That building housed the NSA fifty years ago. All those other buildings are new since that time. 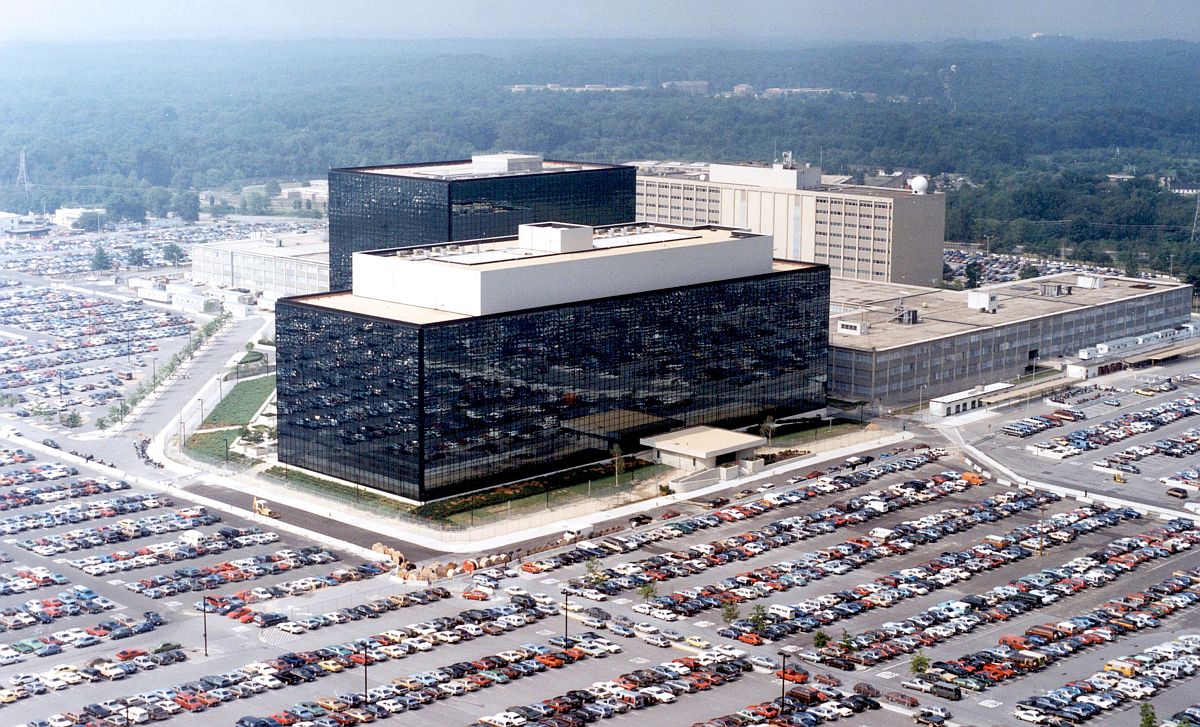 To give you some idea of the size and scale of the NSA in 1972, according to my escort/shadow, that "little" building held 16 acres of computers -- underground -- and at the NSA's Utah Data Center, below, every one of the buildings in the photo is bigger than the black building in the photo above.

Every bit and byte of every communication that passes through most of the the worlds' satellite, telecommunications and Internet systems -- analog phone, digital phone, computer transmission, text message, email. FAX, EFT, you name it -- is collected and stored at NSA's Utah facility, and it doesn't matter if it is encrypted. The NSA has the world's best cryptologists. It likely has several hundred of them -- ans several thousand language experts.

This database is where the NSA begins its spook work. It also allowed Obama to look the American People in the eye and say, "no one is reading your emails or listening in on your phone."

Of course not, the computers do it -- but when a keyword is recognized, that data string is routed to a tier-two database, and the process repeats to tier-three, and repeats again, each iteration having a finer focus, until there IS someone reading your email, or listening to your phone conversation.

If a really powerful person, had one of those "national emergency" reasons, the NSA could easily bypass all of the above and just build that neural network from a name, or a telephone number.

The point is -- they know the facts. They know the truth. They use misinformation the way a shepard uses a sheep dog. To lead the sheep.

The process is so sensitive that James Clapper lied to Congress about it -- and everybody knows he lied about it. That's perjury -- a felony. General Flynn's life was destroyed for less, but these Swamp Democrats have a pocketful of get-out-of-jail-free cards. Look at Hillary.

So, what is misinformation, and what is not misinformation, has more to do with who is making the claim rather than the facts of the claim. Biden, his government, their friends in the media, and the RINOs have the most power, most money and the biggest megaphone, and they will use them all to totally control the national narrative and attack anyone that is not on board. 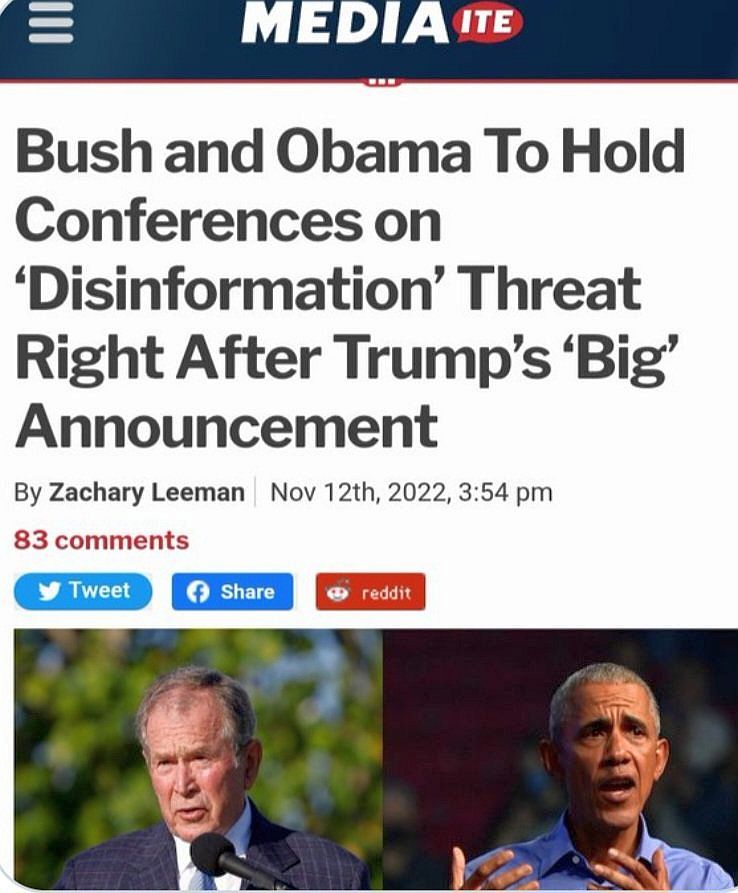 There are millions of people in the United States that deeply believe Trump is a criminal, even though he has has been a super-productive member of society, and has never been convicted of anything by any court. Those same people refuse to believe the Biden Crime Family might ever have crossed the road against the light.

So, who really are the "misinformers?"