Whose Kids Are They?

Getting To Kids Early Is Key

Biden says they're not yours

Who your kids belong to depends on who you ask . . .

The Supreme Court found, in Washington v. Glucksberg, 521 U.S. 702 (1997), that the Constitution, and specifically the Due Process Clause of the 14th Amendment, protects the fundamental right of parents to direct the care, upbringing, and education of their children. That changed in 2000, when the Court, in Troxel v. Granville, opened the door for individual judges and States to apply their own rules to parental rights.

However, the Left never did let a silly thing like the U. S. Constitution stand in the way of "progress" and "change" anyway. You see, there is a mindset on the Left that children don't necessarily belong to their parents. Whether the lefties will admit to it or not is irrelevant, because they display it every day in a million ways.

Whether it be through Left and far-Left curricula or WOKE medical changes, there are growing concerns that progressives are looking to take parents out of the equation whenever and wherever possible. The Washington Post makes no bones about it.

How's this for a headline?pic.twitter.com/WNX9TfkHPw

Articles like this, along with other recent developments, such as the clandestine implementation of Critical Race Theory and Genderism, reveal just how un-taboo the idea of limiting parental influence over schools is in the educational world.

As COVID sent students home to learn via online classrooms, clashes suddenly began to arise between parents and teachers. One school district in Tennessee tried to get parents to sign an agreement to not listen in to classes. Some teachers publicly lamented the scrutiny their progressive lessons received from parents who were overhearing them for the first time.

Harvard Magazine comes right out and says it, homeschooling is dangerous and should be banned. The writer sees risks for children -- and society -- in homeschooling, and recommends a ban on the practice and argues that if parents want permission to opt out of schools, the burden of proving that their case is justified should fall them.

Tulane professor, Melissa Harris-Perry, is unsure who your children belong to. pic.twitter.com/OCfdGWRr3i

"We have never invested as much in public education as we should have because we've always had a private notion of children; your kid is yours and totally your responsibility. We haven't had a very collective notion of these are our children," Harris-Perry opined.

Little Nicky, AKA: Nikole Hannah-Jones says parents shouldn't be in charge of their kids' schooling, saying, "I don't really understand this idea that parents should decide what's being taught. I'm not a professional educator. I don't have a degree in social studies." Yet, she wants her bogus U. S. history, the "1619 Project," taught in all the schools.

Nikole Hannah-Jones says parents shouldn't be in charge of their kids' schooling -- she should! pic.twitter.com/bdkZcWSCq0

When the governor of Virginia announced a bill meant to curtail the progressive assault on K - 12, the Left exploded in outrage. Democratic members of the Virgina legislature sat in silent contempt of the idea that parents have a say in their children's upbringing, education and care.

Virginia Democrats sat in silent contempt of the idea that parents have a say in their children's upbringing, education and care. pic.twitter.com/0z7j3yyuSI

When Florida passed a law prohibiting classroom discussions on sexual orientation or gender identity for children in kindergarten through the third grade, the Democratic National Committee went crazy, describing the bill as "homophobic" and "reprehensible" and falsely relabeling the measure as the, "Don’t say gay bill."

The bill, which Democrats have falsely propagandized as the "don't say gay" bill, actually prevents teachers from bringing gender ideology into K-3 classrooms.https://t.co/d7Eco4stRk

Objecting to the sexualizing of five to eight-year-olds is supporting child abuse and pederasty. You can't have it any other way.

The assault on our kids by the LGBTQXYZ community is particularly aggressive. Compass Community Center describes itself as a queer-led community center in Palm Beach County that serves youth, starting at age three. They pledge to stand with the alphabet community and will keep investing in kids and their families, because there’s no such thing as other people’s children. 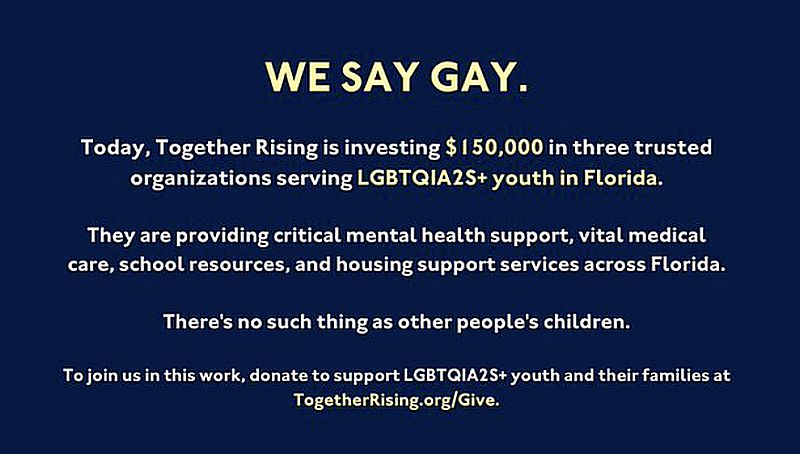 "Other people's children" is an idea most famously expressed in recent years by Hillary Clinton in her 1990s best-seller, "It Takes A Village," but it is hardly a new idea. Karl Marx, and his partner Engels, both called for children to belong to the state and the abolition of the family.

The biggest problem of all -- and the one who gets the least attention -- is the independent advocate, those teachers who are self-motivated to share their queerness. This Minnesota preschool teacher, who readily admits to grooming kids, is just one example of what's in your kid's classroom -- and there's lots and lots of them.

The radical Left teacher, who is an independent advocate of Queer Theory, is self-motivated to share their queerness. They are everywhere. pic.twitter.com/FpNvPAMPiC

It's the same old, same old! People without kids somehow are always experts on what it takes to raise kids and most of these types have no plans for kids, so they practice on yours. There is also the element of misery loves company.

In Joe Biden’s State of the Union Address, the old guy uttered a curious line about helping transgender children reach their "God-given potential."

Biden tells transgender Americans 'I will always have your back' so you can 'be yourself and reach your God-given potential.' Read more: https://t.co/GTbvQckcwC

You can expect the Left to promote any kind of weirdness, and I understand Biden doesn't write his speeches, he just reads them, but you don't usually expect the President of the United States to publicly endorse a psychosis. Furthermore, the idea of a person changing their biological sex is a sinful rejection of nature and of God's design.

It's little wonder that a child exposed to 12 years of this stuff would come out the back end as a self-loathing, transsexual, Democratic Party voter, covered in piercings and tattoos. On a personal level, if I were being told by my teachers that I was a racist homophobe every day, I would become very resentful.

Bottom line is we all need to stay on top of what's happening in our families. Talk to our kids. Take a real interest and, if we think -- or smell -- something's wrong, do something about it. That's the hard part, because the "proper authority" is usually the root of the problem, but the fight must be fought.

And if you have to, sue the bastards! There's help out there. Here's one example.