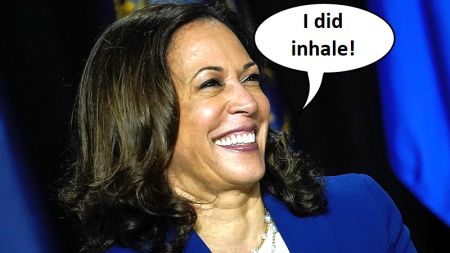 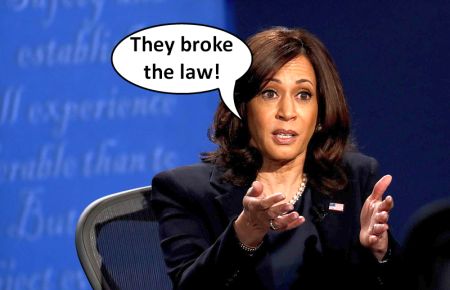 A bulletin shouts, "Joe Biden has announced his immediate resignation" -- "Kamala Harris has been sworn in as the 47th President of the United States"

If there was ever a case of the Peter Principle run amok, it would be the sitting vice president. This is the natural result of selecting our leaders based on their skin color and reproductive parts -- abandoning excellence to race and gender. All of the things opponents warned -- that it inspire mediocrity, leads to lower standards, and sets unqualified people up for failure down the line -- are precisely what we’re seeing in the shockingly poor job performance of Harris.

Biden has admitted he chose her as his running mate, first and foremost, because she is a woman. "I'll pick a woman to be vice president," he declared during a Democratic primary debate, and the Congressional Black Caucus leaders, pointing at the Black Lives Matter riots of 2020, demanded his choice also be black. Qualifications for the actual White House were’t really part of the equation. Simply put, Harris never deserved it and she never earned it, and that’s what got us to here.

Harris proved at the beginning of her political career that she was willing to do "whatever it takes" to overcome her obvious limitations and get ahead. After graduating law school and finally passing the bar exam on her second try, Harris began sleeping with San Fran super-pol, Willie Brown, who admits to "dating" Harris and helping her career. As soon as Willie served her purpose, Harris threw the guy away like an old shoe, but "l'affaire Willie" left her with a few odd nicknames.

Harris's grasp on the little things, like the Constitution and how the government operates, is shocking! Beyond running a district attorney's office, what are her talents? She believes government exists only for public health, public safety and public education.

A government has three functions: public health, public safety, and public education. The GOP budget doesn’t prioritize any of them.

Funny thing is, not one of those things are mentioned in the Constitution. Immigration, taxation, justice, defense, war powers, and spending are all in there, but are ignored by Harris, who was once one of the most progressive members of the Senate.

Individuals, who have advanced beyond the wildest dreams of Dr. Peter, rarely have the skills to manage people who are really competent at what they do. They become martinets who delegate and are never happy with the results, creating a toxic work environment. One staffer said, "you have to put up with a constant amount of soul-destroying criticism and also her own lack of confidence. So you're constantly propping up a bully and it's not clear why." In her first year as vice president, six of her senior staffers have quit.

It's not that Harris doesn't rely heavily on her staffers, she does. When Jussie Smollett tried to start a race war because he wasn't getting paid enough, Harris jumped to his defense, tweeting, "Jussie Smollett is one of the kindest, most gentle human beings I know. I'm praying for his quick recovery. This was an attempted modern day lynching. No one should have to fear for their life because of their sexuality or color of their skin. We must confront this hate."

We all know how l'affair Jussie turned out, but watch how Harris turns to her staffers to answer a simple question from a reporter about her "lynching" tweet.

How's that response for quick on your feet? When her staffers all look at her with blank faces, Harris relied on her standard response to questions -- she giggles -- followed by a lot of "ums and ahs" and gibberish.

Harris is so incompetent, that the "Invisibles," the unknown people who are really in control of the Biden administration, have taken to stage-managing her. This cringe-worthy video was produced to sell children on the wonders of space exploration and featured Harris giving a memorably loopy performance alongside a quintet of child actors who had auditioned and were cast for their roles

All of that stuff is fine and good, but it's domestic. It's on the world stage where Harris really glimmers.

While in Singapore, Harris came under fire for laughing when asked about the deadly chaos in Afghanistan. A reporter attempted to ask Harris about Afghanistan, but Harris cut her off before the reporter could finish her question.

"Hold on, hold on! Slow down, everybody!" Harris said, before letting out her now-notorious laugh -- her shoulders shaking -- she giggled and laughed.

The New York Post reported, that it's "apparent she thinks it's a laughing matter," one person tweeted as the footage of her cackle was spread on social media.

"This is like a Saturday Night Live skit, except it's real and she's not acting. Nothing to laugh at," another person wrote, while others showed a meme where laughter was her response to every emotion. "How has she not trained that laugh away yet?" another asked.

The questions didn't stop when Harris arrived home, but her answers didn't improve.

That brings us to today.

As a big chunk of the world is choosing up sides and the Commander-in-Chief is back in Delaware, running the family business and doin' deals, Harris has been boning up on her geopolitics -- just in case.

"Is Kamala Harris ready to step into the role of Commander-in-Chief?"

When people are asked, the answer is either a quick "no!", "fuck no!" or a blank stare, because every thinking being on the planet knows Harris is not now and never will be ready for prime time.

I'm not saying it's her fault. It could be (ambition is far more powerful than crystal meth), but Harris is simply what you get when competence is weighted far lower than race and gender. The worst part, it's all done under the false banner of "fairness."

May God help us if Biden gets any worse than he already is.

It's that damned fundamental transformation crap. Obama and it are at the core of it all. I think Barry thinks of himself as the godfather now. Wielding power from Dee Cee and The Vineyard.