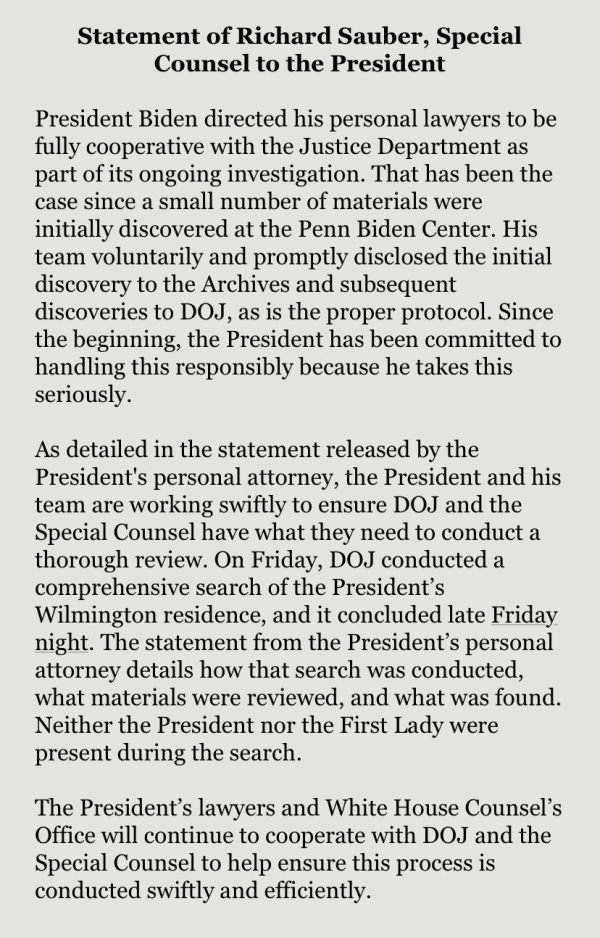 
"I Forgot" Is No Excuse

This Is A Confession 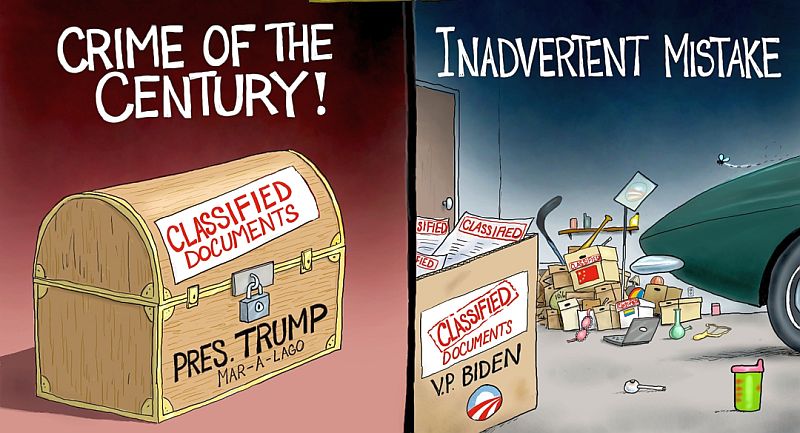 Obama's assessment of Joe Biden may or may not be fair, but right now, Biden's "ability to f*ck things up," is affecting the whole country. The Department of Justice, the FBI, other federal agencies, the Democratic Party, the Democratic media, and a gazillion useful idiots, all must now pretend that Joe Biden was not "grossly negligent" in his handling of classified documents -- for six years.

What we've been told

Update: The White House released its "official" cover story (left panel). It would be useful to read the statement before reading further -- click for large copy.

What we have been told is that six years ago, after Biden left the White House, he "inadvertently misplaced" up to a dozen TOP SECRET Sensitive Compartmented Information (SCI) documents in at least two unauthorized and unsecure locations. For reasons known only to God and Joe Biden, the White House Counsel just happened to find these highly-classified documents a couple of days before the last election. Why the White House Counsel was rummaging around in an old office at the U Penn Biden Center remains a mystery.

TOP SECRET (SCI) is a classification that identifies especially sensitive material. It's "Eyes Only," chain-of-custody stuff. You have to sign for it and read it in a special room. The document is tagged to the reader and the reader to the document -- and both to the room it's read in. Breaking the chain is a felony. There is no, "I lost it and I forgot where I put it," or "the dog ate it" stuff.

These documents should have been known to be missing, and somebody should have been looking for them. Government agencies spend millions building and maintaining sophisticated classified document tracking systems. When the DoJ invaded Mar-a-Lago, officials tracked the chain of custody for documents seized from Trump’s estate.

They won't do that, in this case. Biden's DoJ has already put this scandal to bed. Now, they just have to defend their story -- but they are going to have some problems -- and that's where it gets interesting.

TOP SECRET (SCI) documents must be stored in a Sensitive Compartmented Information Facility (SCIF), and they must be accessed in an SCIF facility, by an individual cleared for access to a specific SCIF document.

An SCIF is an accredited area, room, group of rooms, or installation where Sensitive Compartmented Information must be stored, used, discussed, and/or electronically processed, where procedural and physical measures prevent the free access of persons unless they have been formally briefed for the particular sensitive compartmented information authorized for use or storage within the Sensitive Compartmented Information facility. SCIFs have specific construction requirements, and their subsequent accreditation is separate from those for Controlled Areas and is coordinated by the Department’s Special Security Officer (SSO).

Information that has been determined to be TOP SECRET (SCI) may only be stored and used in a Sensitive Compartmented Information Facility (SCIF).


That's not very ambiguous -- and it sure isn't the way Biden's TOP SECRET (SCI) documents have been handled and viewed by what now appears to be dozens of civilians and civil servants with no authority to be anywhere near them.

Every person who has had access to the documents found in the closet and the garage, from the moment they were signed out -- especially the original authorized person -- is in violation of 18 U.S. Code § 798, Disclosure of classified information.

Access to SCI will only be granted to individuals who have a need-to-know, have been granted a Top Secret clearance by Personnel Security (PerSec), and are approved by the Executive Branch Department’s Intelligence Community granting agency, and only upon completion of a separate Nondisclosure Agreement, the IC Form 4414.

A request for approval of SCI will be initiated by PerSec for an individual whose position requires access to SCI, after favorable adjudication of their background investigation and an NSI briefing from Information Security

White House Counsel, Richard Sauber, is credited with "finding" the original set of documents in a closet in Biden's old office at the University of Pennsylvania's Biden Center. Was Sauber cleared to access those SCI documents? Are others who are searching for, or have had access, to those SCI documents cleared according to the requirements above? It's highly unlikely.

Oops! Felonies for everyone. Anybody who has handled those SCI documents, from the moment they were criminally removed from their controlling systems, and who has not been cleared, should be under arrest and debriefed. Sauber, and all of the others, are not only witnesses to a felony, they are themselves, felons.

One thing is certain, these documents have not been stored and accessed in the secure SCI facilities that are required by law -- and where are the documents now? Do they still exist? Only Joe Biden's personal and government employees know -- and they're all busy making up lame stories to cover up this scandal, which is clearly the biggest Big Guy scandal yet.

There are regulations up the ying-yang for handling classified stuff -- especially TOP SECRET (SCI) stuff -- and these regulations are built into the systems that control and track access to sensitive artifacts.

In addition, a physical inventory of all Top Secret documents will be conducted during June of each year by the Top Secret Control Officer and witnessed by a staff member holding a Top Secret clearance.

The chain-of-custody for the Biden documents -- and we really don't know if the Big Guy is the person who signed for those documents -- was broken soon after they were signed out and have been floating around since 2016 or 2017. Automated control systems have "alert" mechanisms built into them that signal when a sensitive, especially, a TOP SECRET (SCI), document has not been returned. So, THEY know the documents are missing. THEY know who signed for the documents. THEY know who failed to sign them back in. It takes a special effort to ignore that BIG HOLE in the annual inventory -- year after year -- but someone isn't doing their job and making a call.

It is the responsibility of any staff member who has knowledge of the loss or possible compromise of classified information to immediately report the circumstances to the Director, OAO. The Director, OAO, will notify the originating Department and any other interested Department of the loss or possible compromise in order that a damage assessment can be conducted. An immediate inquiry will be initiated by the Director, OAO, for the purpose of taking corrective action and for recommendations to the chairman, through the Review Committee, for appropriate administrative, disciplinary, or legal action.

Remember, we still have zero information on who signed these documents out. Everybody just assumes it was Biden. We don't know that. If Biden is not the authorized viewer, then there's a whole new layer of mystery. In any case, the person who did sign out for those TOP SECRET (SCI) documents had to knowingly walk out of an SCIF with those documents, that's a whole other crime, and that person's signature or initials are in the system.

A whole bunch of somebodies, somewheres, knows, but they ain't saying "doodley" -- but they know.

What could they be afraid of?

Biden's corruption corrupts all it touches

Now, the federal agencies that are responsible for investigating and prosecuting federal crimes are compelled to cover up Biden's crimes -- to be complicit in those crimes -- and everybody in the country knows what is going on -- but few will speak.

The news media, social media, and popular media will all pontificate knowingly on the many reasons why this scandal isn't a problem for Biden. They will spin wild theories that have little to do with the real issue. All will declare the Big Guy guiltless -- and if these fail, there is always their number one fallback -- "but, Trump!"

There may literally be an hundred felonies here. There are as many as a dozen documents involved and the multiple violations apply to each document, but, like any self-respecting criminal, The Big Guy refers us to his lawyers, and says, "I have no regrets... there's no there, there."


So, it spreads. It's a cancer and it's metastasizing throughout the nation.

No one will ever get to do an analysis of why the documents were so important to Biden that he broke dozens of laws and rules to obtain them. That will all be assigned to the dust bin of history.

In a nation of laws, one man now stands separate from and above the law and above all other Americans, and, ironically, it's the Department of Justice that put him there and is keeping him there.

At the rate this bunch is going, who is to stop them from just canceling the next election?