Do The Devil's Work

The Left has zero self-awareness

Attributing one’s own sins onto one’s opponents is a core characteristic of the leftist.

Maybe, but not like the Left. The Left has an entire industry that is dedicated, heart and soul, to spreading the administrations "message," regardless of the foulness of its stench or the absurdity of its claim.

Watch Joe Biden dissemble as he responds to the Supreme Court's finding. The Court didn't take anybody's right away from anyone. The Court reaffirmed federalism, and simply said that the "abortion decision" -- to allow or ban and everything in between -- correctly belongs to the states, and not the federal government -- especially one that supports the right of a woman to abort her child up until the age of eighteen.


So there's Joe Biden lying to the People and as a result, they take to the streets of Los Angeles in righteous Anger -- except abortion is legal in California, and nobody is threatening to change California law -- but the Democrats get to build up anger towards conservatives, and that's what it's really all about. Keep the masses pissed!

Conservatives are a threat to "Our Democracy"

To a Democrat, the U. S. Constitution is not the law. Democrats believe the Constitution is more like a "framework," something that's subject to interpretation and has the flexibility to suit whatever political end they require at any given moment. 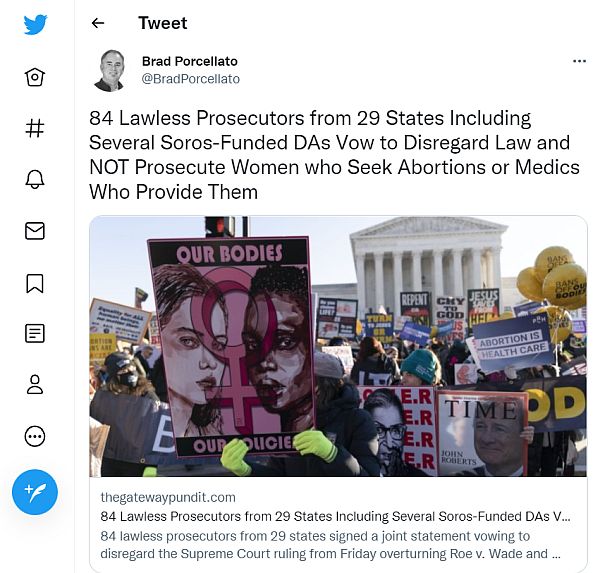 Most Democrats take their oath of office, "to support and defend...," while knowing they will do everything in their power to limit the 1st Amendment, cancel the 2nd, and put an end to the private property protections of the 5th.

Attributing one’s own sins to one’s opponents is Rule #1.

Please note, the above tweet has now been up for more than three full days. It wouldn't last five minutes if the target was Ketanji Brown Jackson, rather than Clarence Thomas.

There's not a lot of nuance in Aubrey's tweet. She gets right to it and she's volunteering for the job -- the modern American uterus bearing individual -- and this has been up since Saturday afternoon.

The Left's many beta males are also very violent, but they lack sufficient estrogen to do the deed themselves and limit their participation to cheering on the really crazy activists, like Aubrey. 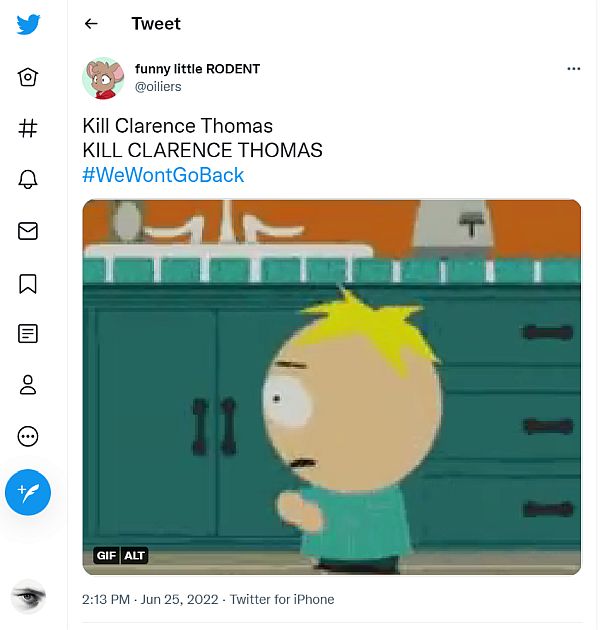 Some lefties are hateful and violent, like the mayor of Chicago, Lori Lightweight, who excites a crowd of Democrats with a cry of, "F*ck Clarence Thomas."


If Lightweight were half as good at governnance as she is at rabble-rousing, Chicago would be a hell of a lot better off.

Pink is an entertainer, so she gets deep into her hate, while displaying her stupidity. Evidently, she missed the bulletin. The government just got out of the abortion business, but Pink is pissed anyway, because . . . ? 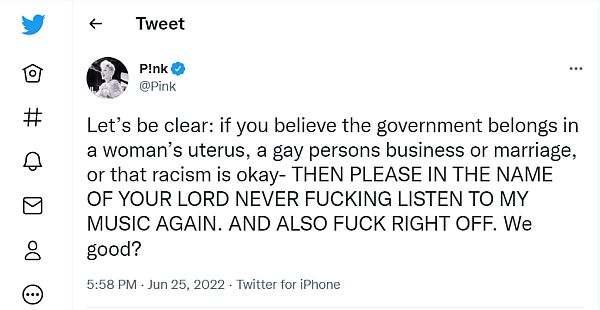 Conservatives and Republicans are evil, but they can change

Cokie Roberts, a certified "good person", has an idea! The Republican Party should change -- can change! They can be "good people" too. If only they change.


Even the panel laughed at that idea. These people are the "good people" elite, and they know, sure as Tuesday, that those knuckle-dragging deplorables are incapable of change.

In their minds, leftists are the "good people" and conservatives are the "bad people" -- but the simple fact is, leftists are mean, vicious, little bastards, who have zero rules or ethics -- they just have wants.

Facts, reality, mean nothing to these people. They live in worlds -- yes, plural -- worlds of their own making and you don't belong in them, because, they have already decided you are a bad person.