SCOOP: A coalition of taxpayer-funded trans organizations has demanded that society “decolonize the gender binary,” provide cash reparations to “gender-nonconforming people,” and affirm “mustache[s]” and “big dick[s]” as authentic expressions of womanhood.

Here is the story.🧵

DC Launches Ad Campaign To Combat Anti-Trans Hate on Public Transportation. There’s Been One Incident in the Past Two Years. https://t.co/FFzBStXjz4

And On Your Dime!

We Can Beat It!

The Antidote Is Reason

Team Biden is committed to the queering of America

The Biden Administration's National Strategy On Gender Equity and Equality states, "advancing gender equity and equality is both a moral imperative and a strategic one."

An introduction, written for Biden and Kamala says, "On International Women’s Day, the President issued an Executive Order establishing the White House Gender Policy Council to ensure that gender equity and equality are at the forefront of America’s domestic and foreign policy."

Screw national defense and international relations, gender equity and equality shall be "at the forefront of America’s domestic and foreign policy."

Why would we ever put "gender" ahead of anything?

The executive order (EO) begins with a thousand-word paen to women, but quickly switches the beneficiaries of this government largess from "women and girls of color," to its real target, the LGBTQI+ people and "genderism" -- Queer Theory -- making the normal, abnormal and the abnormal, normal.

The inclusive language of the executive order is betrayed by its title, the "National Strategy on Gender Equity and Equality," and check out the language.

"Gender" is used 301 times. "Equity," an euphemism for Marxism, is used 87 times. "Gender equity" is used 45 times. Biden's "plan" doesn't have a damned thing to do with women and girls and people of color unless they are "transitioning."

When you cut through all the bullsh!t, what the EO is all about is funding the Left -- and remember, this is happening all over the federal government, and it impacts the private sector, as well.

The Gender Policy Council, also established by executive order, is led by Jennifer Klein, who  is married to Todd Stern, who served as the US Special Envoy for Climate Change (they do inbreed), but its members are unnamed. There's probably a reason for that.

That's what this is all about. Funding leftist activists with federal tax dollars -- your tax dollars. That's where the money goes and the money is in the billions. The administration doesn't care if it goes to black activist groups, or LGBTQXYZ groups, or people who have sex with trees groups. Any activist group will do -- and the irony is, much or most of it is being funded by middle-of-the-road and conservative Americans.

Federal departments and agencies have been tripping over themselves to pledge allegiance to LGBTQXYZ activism by pledging their sweat and budget dollars to the cause -- those department managers want a good annual review -- a promotion.

Guess how you get one? Just look at what we saw on the Internet last weekend, the Memorial Day weekend. Thanks to social media, Americans got a good look at the main obsession of this administration on Memorial Day.

On Memorial Day, the Biden administration devoted dozens of Internet shout-outs to the Alphabet People, but couldn’t spare half that attention to the men and women who gave all.

It’s astounding that any government agency would refuse to acknowledge and honor the military men and women who died fighting for this country, while setting aside an entire month to recognize and celebrate the Alphabet People and their lifestyle, but they did.

With gas prices soaring, officials at the Energy Department posted, “Pride. This month. Next month. Always,” on social media, which drew a stream of angry replies, and at the Department of Health and Human Services, where Secretary Xavier Becerra is on a personal crusade to fund children’s transition surgeries with taxpayer dollars, the agency released a 1,600-word novella on pride, that offers fifteen statements from HHS leaders, including Adm. Rachel (Richard) Levine.

Not to be outdone, education officials decided to change their government seal to the “progress pride” flag, paying special homage to transgenderism,

Meanwhile the Marines, Air Force, and Space Force hyped everything from rainbow bullets to astronauts “queering” the moon.

The U.S. State Department, which -- apart from posting more pride tweets than anyone in government over a 24-hour span -- also managed to enrage the world’s religious community with its "in your face" stunt at the Holy See.

The jarring site of the U.S. Embassy, an official office of the United States, just steps from the Vatican, waving the LGBT flag in the face of the Church felt like just the latest middle finger from Biden to people of faith. 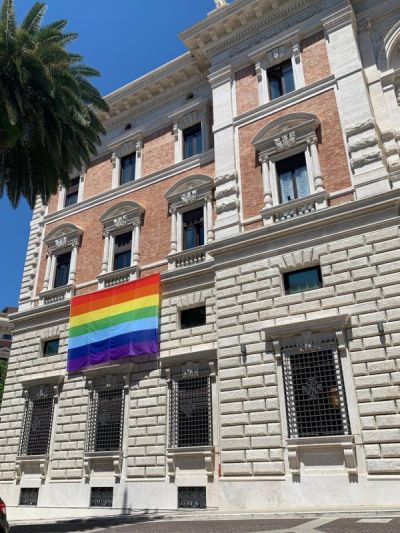 I'd like to see the State Department try that in Riyadh, Saudi Arabia.

Do you really believe all of these corporations just decided one day that it was in their corporate interest to endorse all things LGBTQXYZ? They have been leveraged by the federal government. It's authoritarianism. It's government control over the private sector -- it always begins in small ways

The federal government is the world's largest purchaser of nearly everything and it leverages these companies with subtle threats to go along and these corporations do not want to be on the federal government's sh!t list. We're talking millions -- even billions of dollars in federal contracts here.

This all has a huge impact on society and mostly negative. This "gender” stuff is emotional, not biological. So why do all the rules and norms of society have to change because an individual, or small group of individuals, want to change theirs.

No one is stopping anybody from doing whatever weird sh!t they want to do to or with themselves, yet the government of the United States is demanding that 300 million Americans change their way of life for the smallest of minorities.

Doing so would be insane.

So why is the government doing it, other than getting used to its authoritarianism.

It's going to be interesting to see what's next.