For 195 years, Merriam Webster has defined "female" as, "of, relating to, or being the sex that typically has the capacity to bear young or produce eggs."

All that changed this week when the folks over at Merriam Webster experienced a corporate mindf*ck and gigantic lapse of sanity! 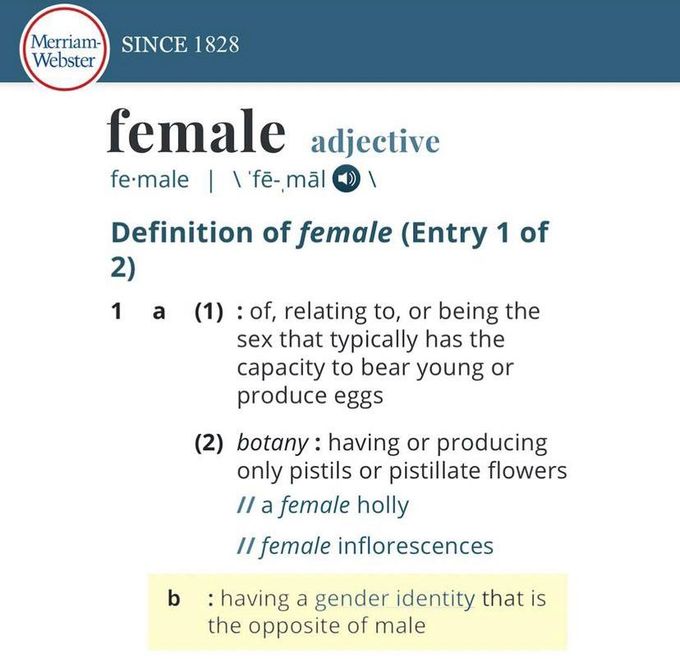 The stealth addition of gender identity into a dictionary entry on female biological sex shows how successful progressive activists have been in redefining words.

The online dictionary also changed the definition of the word “girl,” by adding a secondary meaning that says “a person whose gender identity is female.”

In a clear oversight, the lunatics at Merriam Webster haven't gotten around to "womanhood," yet, but I'm sure Biden's gender equity activists will be all over the dictionary to correct this obvious oversight. 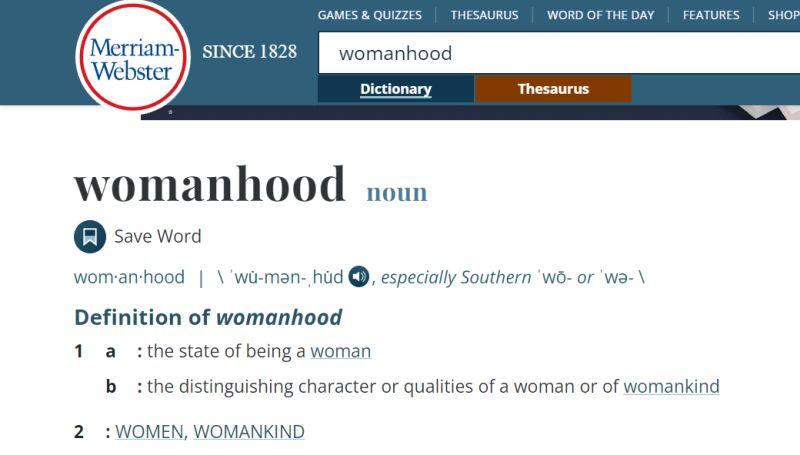 The motivation leading a supposedly authoritative source of information to fundamentally alter our understanding of language is a direct result of the political pressure coming from this White House. Pressure to conform to the latest demands of progressives, and to avoid being labeled as an "anti" by left-wing news outlets. The least acceptable outcome for the dictionary is to be called a "transphobe" by a prominent liberal or "socially conscious "journalist." So, they panicked and caved to the demands of the trans activists.

This redefinition now means that transgender athletes, like Lia Thomas, are now "officially female," because Merriam Webster defines their gender identity as the "opposite of male" -- but wait! Thomas has a complete male sexual package, and dates women, but he's winning national women's sports titles because he puts on a women's swimsuit. Go figure!

C'mon, ladies! Don't you have anything to say? After all, this is the end of the dreams of millions of girls and young women who wish to pursue athletics, and the scholarships that may come as a result of their sweat and tears.

If that doesn't frost your butt, how about the National Women's History Museum featuring the biographies of three men in drag?

During a Senate committee hearing on abortion policy last week, University of California Berkeley law professor Khiara Bridges had a sharp exchange with Sen. Josh Hawley, a Missouri Republican, over Bridges’ use of the phrase “people with the capacity for pregnancy.”

When Hawley asked Bridges if she was referring to women, Bridges said that some women can’t get pregnant, just as there are some transgender men and nonbinary people who can get pregnant.

After Hawley pressed her again, Bridges accused Hawley of transphobia, and that he “opens up trans people to violence by not recognizing them" -- a claim that may or may not be true, but Bridges uses it to end the discussion, just like she was taught in commie school.

If you are sane, and reject this foolishness, the Alphabet People will tar you as a bad person -- a homophobe -- a transphobe. There will be no criticism. If you criticize, or even inquire, you will be smeared as some sort of evil bigot.

More than 80 House Democrats recently introduced a resolution they call the "Trans Bill of Rights." The authors claim it will ensure that transgender and nonbinary people are, as a lead sponsor Rep. Marie Newman put it, "free to live as their authentic self," but in practice, the Trans Bill of Rights guts protections and programs for biological women.

The Trans Bill of Rights would redefine the term "sex" under the Civil Rights Act to include "gender identity and sex characteristics," and prohibit public accommodations and federally funded programs from offering spaces and programs exclusively for women. In other words, it would become illegal to take into account sex, or "sex characteristics," and single-sex facilities would cease to exist.

If a female athletic team cannot discriminate against males, then men will dominate competitions meant for women. If women’s locker rooms, rape crisis centers, and domestic violence shelters are required to take in men, women’s privacy and security will be compromised. If men are allowed to opt in to women’s prisons, then female prisoners will face physical harm and sexual abuse, as they already have.

The Trans Bill of Rights would accelerate this trend by forbidding the taking of sex into account entirely so that any man -- not just men who identify as women -- could choose to compete in women’s sports, apply for an engineering scholarship meant for a woman, enter a female prison, or choose to undress in a women’s locker room. Single-sex facilities would disappear.

It would mark the end of women's "set-aside" federal contracting opportunities, Anybody that claimed to be a woman would be able to bid on federal contracts that were previously intended for women-owned businesses exclusively. Every single federal women's program would effectively end, because any guy that has the balls to put on a dress, would now qualify.

There are 330 million people in the United States. Half of them are "real" females. That's 165 million Americans who will lose their natural rights to a population estimated to consist of 1.4 million adults.

As usual, the Democrats claim this madness is being driven by the need for "equity," but what is equitable about stripping the "rights" of 165 million people to accommodate the "wants" of 2 million? Remember, these people have every right that every other American has to begin with -- they just want MORE rights -- after all, they're "special."

One of the fundamentals of a democracy is the rule by the majority, while protecting the rights of minorities. The Democrats, who are always blathering on about "our democracy," want to turn that fundamental on its head, and make 330-million Americans bend to the will of 2 million.

One cannot be for both women’s rights and this vision of trans rights. One cannot stand up for women without knowing what the term woman means. Americans know what a woman is -- what a female is.

Our laws should too.

Every American must now decide. Do I support the Democrats' vision, or do I stand for women’s rights -- the rights of our mothers and sisters, wives and daughters -- and sanity?

It is impossible to support both, because they are in direct conflict -- and the Democratic Party made it so.