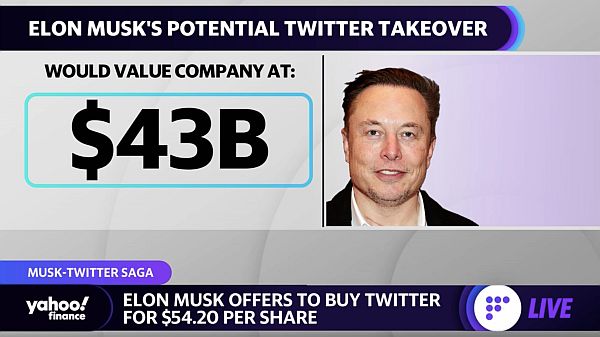 Twitter is considering a poison pill to thwart @elonmusk's offer. They would rather self-immolate than give up their censorship programs. This shows you how deeply committed they are to Orwellian control of the narratives and global discourse. Scary.

Thursday was a banner day in corporate media. It was the day they were forced to explicitly state what has long been clear to even the most casual observer -- that the Left not only favors censorship, but desperately craves and depends upon it.

The fact that the Left is going nuts at the thought of Elon Musk buying Twitter demonstrates loudly and clearly that Twitter is a left-wing property that censors voices and ideas that offend "progressive" sensibilities -- and Twitter likes that it has the power to do that.

Twitter has effectively become the de facto Town Square for the world and for that reason, it is important for everyone that free expression be preserved, and Twitter's potential be unlocked, but what Twitter's board of directors is doing has everything to do with denying freedom of speech to those whose views do no mirror their own, and has nothing to do with high finance or business -- which ironically makes them the Fascisti they warn us about.

Yes, the very people who have been labeling anyone and everyone on the Right as fascists have turned out to be the real fascists. They are the ones trying to silence others on a global scale. It would be hilarious if it weren't so damn terrifying. Some Progs are even calling on the Biden administration to confiscate Elon Musk's wealth because of his offer to buy Twitter and take it private.

Musk has offered to purchase Twitter, with a current market value of $37.6 billion, for $43.39 billion. Elon Musk says, that if the current Twitter board takes actions contrary to shareholder interests, they would be breaching their fiduciary duty. The liability they would thereby assume would be titanic in scale.

Watch this sub 5-minute clip to the end to get a sense of what's at stake.


Twitter released a statement that said its board of directors has unanimously adopted a "poison pill" defense in response to Musk's proposal to buy the company and take it private, but with the departure of Jack, the combined ownership of the entire board equates to 77 shares of stock, worth around $3,200 bucks. They have not only, behind closed doors, rejected Musk's offer to purchase the company at 20% above market value. They have threatened to dilute their shareholder's stake in the company. Objectively, their economic interests are simply not aligned with the shareholders. This could be viewed as criminal negligence.

Musk has offered to purchase the popular social media company for $54.20 per share in cash. The offer is a 38% premium over the closing price on the day before the news broke that Musk had bought up 9.6% of the company and at an 18% increase from Wednesday's closing price.

Just last week, Progs hated Blackrock and Vanguard because they buy and control everything. "They own all the major pharmaceutical companies, food companies, gas companies, electric companies, computer companies, banks, governments, and media in the world and pose a rising threat to "shareholder democracy" -- but that was last week.

Former SEC Chairman Harvey Pitt cautioned the Big Tech giant isn't the only organization that can stop this deal from happening. "My concern is that this administration is pretty much guaranteed to oppose this kind of bid," Pitt told FOX Business' Maria Bartiromo on Friday. "I think the danger that the government or Congress might intercede in order to prevent this takeover is a very real threat."

The fact is, Twitter's share price has chopped along sideways for 9 years and today hovers around its 2013 IPO price. The idea that this company, which is no longer founder-driven, is going to unlock more value than the 20% premium of Elon Musk's offer is not credible. The numbers don't lie.

Under the board's poison-pill plan, if Musk, or another investor, acquires more than 15% of the company stock without the board's approval, other existing shareholders would be given the right to buy up Twitter shares at a discount, something that would dilute Musk's ownership interest and make it more difficult, and costly, to wrest control of the company.

It's quite humorous that the billionaire-owned media is suddenly having a moral panic about a billionaire buying Twitter. Every major social media platform is already owned by billionaires, and this has been the case since the early days of their existence. The Left is only concerned that the "correct" billionaires own them.

The guys on the Best Business Show contend that if Musk pushes it, at some point, Twitter would have to relent, and sell. The problem for the board will occur when the "nightmare" of free speech comes in at $60 a share.


If you think politics is downstream from culture, watch as multiple corporate entities coordinate with investment firms, government agencies, foreign rulers, and media outlets to stop just this one piece of the Left's cultural manufacturing apparatus from falling into "the wrong hands." Not a single left-wing wonk or pundit is worried about the possibility of a Saudi Prince, Chinese magnate, or censorship-loving tech oligarch entering the deal and buying it. What all of them are really worried about is the reappearance of Donald J. Trump on Twitter.

Twitter has already been taken over by a very real threat to free expression, its new CEO.

Parag Agrawal, has expressed chilling anti-free speech sentiments. In an interview with Technology Review editor-in-chief Gideon Lichfield, he was asked how Twitter would balance its efforts to combat misinformation with wanting to “protect free speech as a core value” and to respect the First Amendment. Agrawal responded:

Nobody is surprised Twitter turned Elon down, but what IS surprising is how open they now are about their desperation to control the narrative, even at the cost of their own company. Twitter has gone from denying they are seeking to shape speech on the Internet, to embracing that function. They'd rather burn the place to the ground than have a level playing field.

Musk is an advocate for free speech on the Internet and he is an Internet originalist. That makes him an existential threat for those who have long used “disinformation” as an excuse to silence dissenting views in the media and on social media, causing the loony Left to have a mass breakdown as a result.

Robert Reich insists that censorship of views like former President Donald Trump are "necessary to protect American democracy." Get it? Less freedom is more freedom.

As a tool of the national security establishment, the Washington Post is campaigning against Elon Musk buying Twitter because it would share all sorts of information that challenge people's ideas about the world. The establishment wants you to have less info about the world -- not more. WaPo is also worried about the impact the acquisition will have on the gender crowd because, it says, Musk has mocked gender pronouns.

They're not going to even pretend it's about anything but a desire to censor. WaPo's Max Boot quipped, "For democracy to survive, we need more content moderation, not less."

Salon's Matthew Rozsa wrote, it would be a death blow to the free world, "if Musk takes over, reinstates Donald Trump's Twitter account, Trump wins in 2024, and America is plunged into fascism."

Twitter workers are terrified that Musk will turn their free speech platform into a platform that allows free speech.

The widely reported pervasive fear among the Twitter workforce that Elon Musk may endanger or even end their systemic censorship regime illustrates how central of a tactic Internet censorship has become for the Left. Information control is vital to their culture war.

Twitter openly censors speech based on political views and makes a mockery of our Constitutional liberties. If Elon Musk can turn that around to actually protect free speech and encourage open discourse, we'll all be better off.

Even if Musk loses, he has already won by exposing the elitist orthodoxy. There's a lot of money on the table and a lot of people can walk away richer. The question now is, will the Left forego a big payday to maintain its control over the public square?