The "Why Are We Here" Meeting 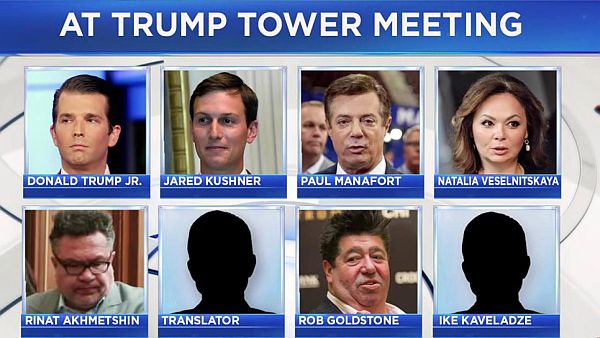 The "why are we all here" hoax

Fusion GPS was paid by a law firm for work on behalf of a Kremlin-linked oligarch while paying former British spy Christopher Steele to dig up dirt on Trump through his Russian contacts.

Simpson and Fusion GPS were hired by BakerHostetler, who represented Russian firm Prevezon through Natalia Veselnitskaya, so, Simpson took their money to set up a meeting with Donald Trump's people to get Trump's influence to help with a US-Russia legal problem. Veselnitskaya thought she was going to the meeting to discuss this issue, called the Magnitsky Act.

On the other hand, Trump's people, including his son, Don Jr., were were led to believe that Veselnitskaya was in possession of compromising information on candidate Clinton, but it turned out to be nothing.

Veselnitskaya says she first received what turned out to be bogus information, describing alleged tax evasion and donations to Democrats.

According to almost everyone’s accounts, the extremely brief meeting ended when Trump Jr. brought it to a close, essentially saying to the guests, "Come back to us when we win and we’ll see if we can do anything about the Magnitsky Act."

A source with firsthand knowledge of the matter confirmed that the firm's research had been provided to Veselnitskaya as part of the case, which involved alleging money laundering by a Russian company called Prevezon.

This account casts Veselnitskaya's activities in a new light, challenging the notion that she was simply carrying talking points to Trump that originated with the Russian government, when, in fact, they originated from the Steele Dossier operation.

All to create bogus links between Trump and anybody or anything that had an address in Russia. In hindsight, an easy thing to do when enough money is spent.