Did He Ever See The Report? 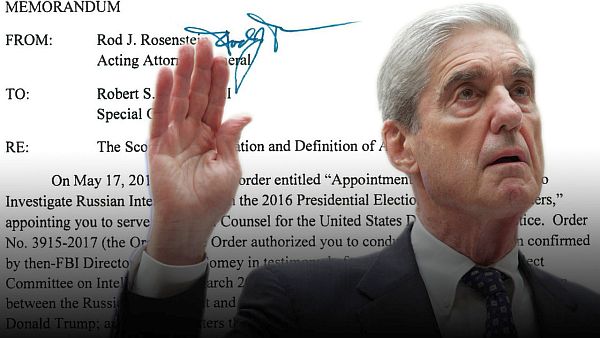 This guy was clueless!

It Was A Coverup!

Now that the Durham court filings document that Robert Mueller did, in fact, rely on the debunked Steele/Danchenko dossier as the roadmap for his probe only to learn its core allegations of Trump-Russia "collusion" were fabricated by Danchenko, why didn't Mueller advise the FISA Court that the information underlying his June 29, 2017, wiretap renewal on a Trump adviser was fabricated? Why didn't he admit his warrant lacked probable cause? The court has since declared it invalid. Why didn't Mueller charge Danchenko for lying? Why didnt he report his findings about the dossier in his final report? Why'd he leave out the fact he interviewed Steele in London Sep 18-19, 2017? Why'd he cover it all up? Why isnt Mueller under investigation for defrauding the court and obstruction?
From The Beginning

The Special Prosecutor Investigation was a whitewash

The Special Prosecutor's investigation into Trump-Russia allegations dominated headlines for two years, but in March 2019, special counsel Robert Mueller’s probe into Russian meddling in the 2016 election came to an end. The investigation, which President Donald Trump continually called a “witch hunt,” found no evidence that Trump’s campaign colluded with Russia.

How did Robert Mueller and Andrew Weissmann spend 2 years investigating Trump-Russia; with a team of 19 lawyers, $40 million in resources, 40 FBI agents, 2,800 subpoenas, 500 search warrants and 500 witnesses; and not find out that the Democratic National Committee and the Hillary Clinton campaign created the hoax they were investigating?

The question is, of course, infuriatingly rhetorical.  The 2017, 2018 and 2019 special counsel probe, led by the nameplate of Robert Mueller, was a DC cover-up operation for FBI and DOJ misconduct.  The best defense is a good offense, so they attacked President Trump by maintaining the hoax.

Robert Mueller was appointed to look into the Trump-Russia collusion accusations. He looked intgo everything except the people who were at the heart of Russiagate. You will not believe this performance.


Robert Mueller and Andrew Weissmann spent 2 years investigating Trump-Russia, with a team of 19 lawyers, and 40 FBI agents, Mueller and Weisman issued 2,800 subpoenas, 500 search warrants and interviewed 500 witnesses. They spent $40 million and the investigation didn't find out that the Democratic National Committee and the Hillary Clinton campaign created the hoax they were investigating. Hell! They didn't know of Fusion GPS? Fusion GPS WAS Trump-Russia!

Peter Strzok certainly knew. He he had been investigating the Trump-Russia collusion hoax since early 2016.  The Crossfire Hurricane investigation began on July 31, 2016, and by the time Michael Sussmann was selling the Alfa-Bank hoax the FBI was aware all of the material was coming from political opposition research and Fusion GPS, so, when you realize the same FBI investigators flowed through 2016 into the Mueller team in 2017, the questions are obvious.  How could the origin of Trump-Russia hoax not be in the purview of the Special Counsel?

Two years later, in April 2019, Mueller and Weissman sent their report, saying there was no evidence of Trump-Russia collusion to AG Bill Barr

Everybody else, in Washington, knew in 2016!