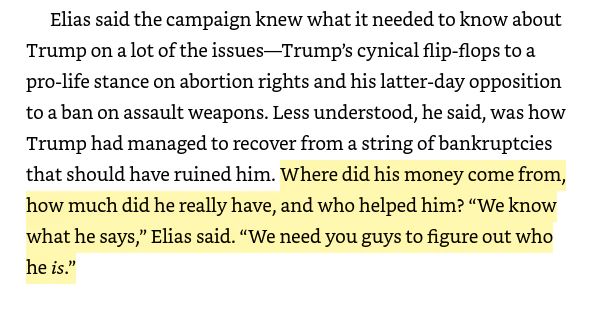 More Than The Dossier

Fusion GPS Was Into Everything

Producer of the Steele Dossier and Trump Tower Meeting hoaxes

Fusion GPS, which straddle the fuzzy border between journalistic opposition research and private intelligence, was brought into the conspiracy during an April 30, 2016 meeting between Mark Elias (Perkins Coie partner and counsel for the Clinton Campaign) and Glenn Simpson, co-founder Fusion GPS, in which Elias requested their services for an opposition research project.

What we all know now, is that Simpson, who described his firm as “journalism for rent,” hired Christopher Steele and within a few months, he produced the dossier, but associating Fusion GPS only with the Steele Dossier was actually short-changing the company’s efforts to harass and take down Trump. This company did much more than that.

Documents uncovered in a DC court case (left sidebar), showed that Fusion GPS was working on nearly every piece of information that was eventually used in the Mueller investigation.

Fusion GPS was involved in the Alfa Bank story that turned out to be a lie, the Carter Page story that was a lie (Page was working for the CIA), the Paul Manafort story, and the Papadopoulos story.  All of these stories and individuals were used by the DoJ and the Mueller gang as a means to harass and attempt to have President Trump removed from office.  Every one.

Fusion GPS also lists as projects, the “Trump kids”.  How outrageous is it that an entity would be creating garbage hit pieces on the first family’s children?  There really were no limits to the people who wanted President Trump removed from office.  They would stop at nothing.

Fusion GPS employee, Nellie Ohr and her FBI agent husband, Bruce, were used by Fusion as a pipeline into the highest levels of the FBI, while Fusion employees frequently shared raw, unverified, and uncorroborated information -- including their own draft research and work product with reporters. It was open season.

Fusion GPS also organized the Trump Tower Meeting, in which the attendees all showed up with different expectations of what the agenda was. This hoax has the smell of something that was organized over a lot of alcohol.

Fusion GPS now says it is not an opposition research firm, and they weren’t hired to dig-up dirt against Trump. Instead, they would have you believe, after the phony Steele dossier that Fusion GPS was retained to provide legal advice to the Hillary Clinton Campaign.