A real-time, public cover up of a massive classified documents breach

It's 6 AM, Saturday morning and this story has changed three times since Thursday, when it was a story about how the media responds to the latest "bombshell." On Friday, it was a story about classified documents, and on Saturday, it became the story of a cover-up -- a cover-up that's happening right out in the open and on TV and the Internet, and everywhere. So, this is going to be choppy, because whatever is here at 8:30 is going out.

Every week or so, a new "bombshell" hits the news and the media does its thing. How the media does that "thing," depends on whether the "bombshell" can hurt of help the Democratic party, and how it affects The Narrative. This week's "bombshell" story is the discovery of classified documents being found in one of Joe Biden's old offices.

When one of these "bombshells"bursts, the popular media usually is the first to notice and respond -- usually within the first 24 hours. The first wave of information is highly-charged, bereft of any real information, but it sets The Narrative. The Harpies of The View demonstrate.


Following close behind, are the always reliable cable news channels. They will pepper the evolving "Narrative" with enough "facts" to establish and solidify its direction -- even though nobody knows at this time what is really going on -- outside of the guys on the inside.


On social media, politicians wasted no time spinning The Narrative to suit their own personal agendas. The crazier the theory, the better -- enter Hank (watch out Guam) Johnson, of Georgia. 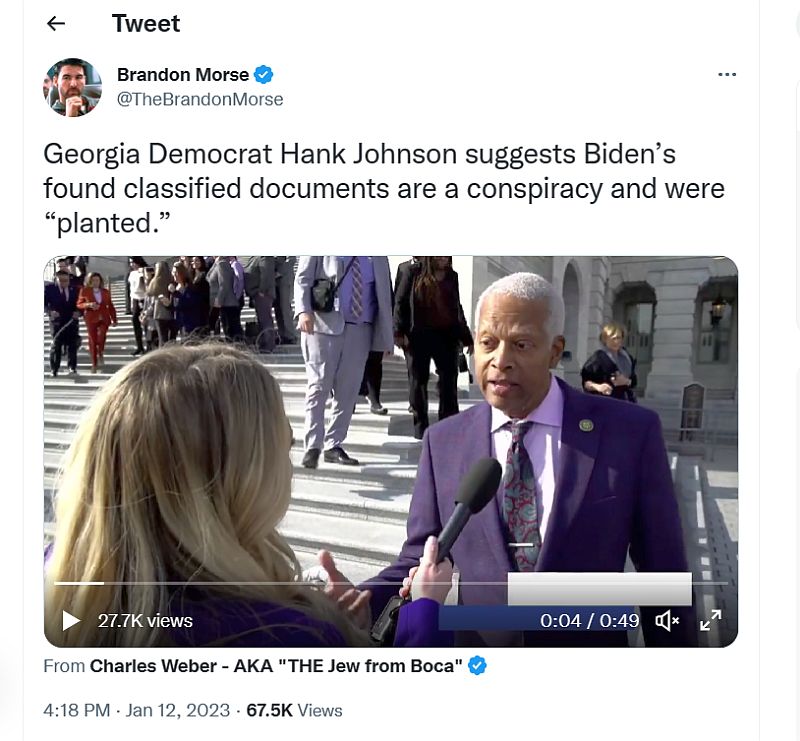 But wait! This time, The Narrative process gets hijacked by the discovery of more highly-classified documents.

Biden’s very-expensive lawyer, Richard Sauber, found the original set of documents in a closet, in Joe Biden's old office, at the University of Pennsylvania's Biden Center -- a building funded by $54 million in anonymous Chinese Communist "gifts" -- days before the election, and in all probability, some time before that -- but did not disclose the finding until January 9, 2023.

The document found were TOP SECRET (Sensitive Compartmented Information), a classification that identifies especially sensitive material It's "Eyes Only," chain-of-custody stuff. You have to sign for it. It links the artifact to the the recipient. Breaking the chain is a felony, but there was an election going on so it was kept quiet until it exploded a few days ago.

When it's a Democrat that has his shorts caught in the ringer, there are no cries of treason or criminality. Oh, no! just some mishandling of documents. It happens, but we did all the right things. We turned the documents over to us, and we are cooperating fully with all the departments and people who work for me.


So, it's not a problem. Everything is under control. Well, it was until a second set of document was found by Biden's personal attorney, Robert Bauer (another Perkins Coie grad), in Biden's home in Wilmington, Del. Those documents were turned over to DoJ.

Then, on Wednesday, a third set of documents was found out in Biden's garage -- with his Corvette.


That same day, Garland tapped Robert K. Hur, a former U.S. attorney, to serve as special counsel to investigate Biden's handling of classified materials -- and this is where the cover-up begins in earnest.

“The search was concluded last night,” Jean-Pierre claimed Thursday in a press briefing. “He [Biden] is confident in this process,” but the, a fourth set of documents was then found Thursday evening -- also at Biden's home -- where son Hunter claims to have been living.

It appears old Joe Biden was leaving TOP SECRET documents wherever he went -- like a trail of breadcrumbs -- so it was time to call in the big guns.

Bob Bauer's appearance on the scene, reinforced for many, the notion that Obama, who once said, "don't underestimate Joe's ability to f*ck things up," is the real "Boss," and Bauer is here to put a cap on this mess.

This latest disclosure further undermines the mantra from the White House that this is a president who "takes classified documents very seriously." According to Biden's lawyers, more documents were discovered in the process of just turning over previously discovered documents.

Now, the Democratic Party is coming for Joe Biden.

Yesterday, Robert Mueller’s “pit-bull” Andrew Weissmann turned on Joe Biden and suggested he was engaged in a cover up. 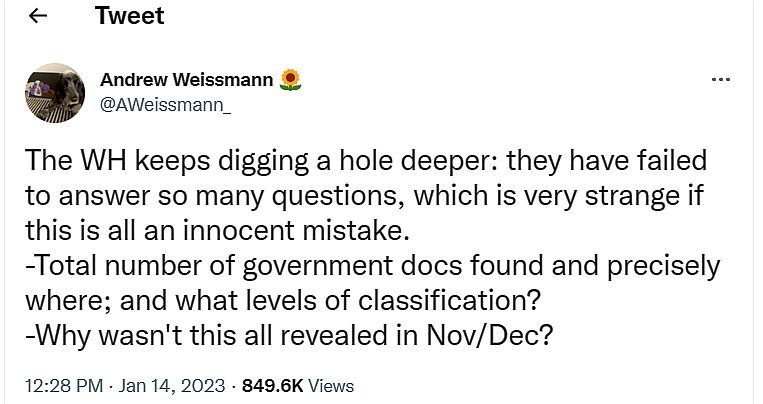 That tweet is the handwriting on the wall for Joe Biden. It's the equivalent of receiving the "black spot" from your shipmates.

Biden's "lawyers" didn’t suddenly just “find” a box of highly classified documents next to Joe Biden’s corvette. A lot more going on here than meets they eye. A lot more. Over two months after the first discovery, the Biden team still did not complete a thorough search. It is chilling to think how Biden would have proceeded if he didn't "take classified documents seriously."

The gross mishandling standard is not confined to the initial removal of the documents six years ago, but how the individual addressed later discoveries or handling issues. The use of private counsel creates another link in the chain of custody. There's the misappropriation of classified documents. There's the Espionage Act, renewing old questions about the foreign connections of Joe Biden and his family.

While details about the classified documents remain scant, we know that they included briefing materials related to three countries: Ukraine, Iran and the United Kingdom. It may be a coincidence that Biden has corrupt ties to two of the countries on the list, but it’s more likely that there was something in these briefing materials that specifically interested him.

While the White House appears to be trying to deflect blame, former Department of Justice prosecutor Andrew McCarthy argued Thursday that Biden has already admitted guilt by claiming he had no knowledge of these violations.

“That’s not a defense to a charge of mishandling classified information,” McCarthy stated. It is tantamount to an admission of guilt.”

“For conviction, federal law requires prosecutors to establish that the defendant was grossly negligent. There is no need to prove that an accused was trying to harm the United States; just that he was trusted with classified information and carelessly flouted the standards for safeguarding it,” McCarthy said.

The thing to focus on, is this. Why are Joe Biden's uncleared, personal attorneys conducting the search for highly classified documents, instead of -- normally I'd write FBI, but? -- anyway, you get the point.

There would be no difference between Joe Biden's personal attorneys and Joe Biden's FBI. What's shocking is that's where we are. We know, with no doubt, that this FBI is an extension of the Democratic Party.

So this cover-up, the one that's taking place right in front of the whole country, is being conducted by Joe Biden's personal lawyers, employing the "honor system. "

Will the Left defend Biden or abandon Biden? Watch the networks today. They'll provide a clue.

Clearly, there's going to be much more. I'll follow it for a while in the Comments, but we'll have to wait to see where this movie goes.