The Merchant Of Death 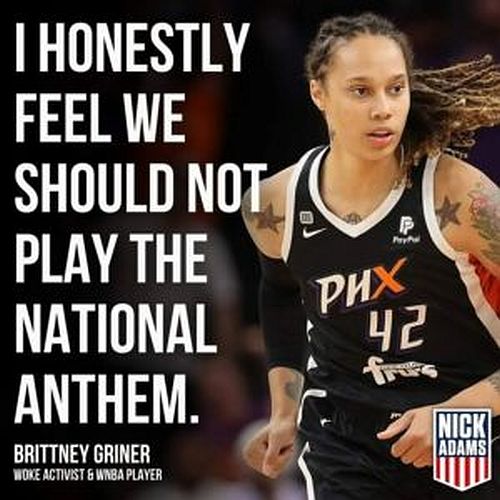 The Brittney Griner deal is the worst trade of all time

"U. S. trades 'Merchant of Death' for basketball player"

The Big Guy's trade, at the Abu Dhabi airport, is possibly the worst trade since the Red Sox traded Babe Ruth to the Yankees -- and it was done for all the wrong reasons. The trade was made because of social justice and "equity," and for no other reason. Just look at the people and the process involved.

Joe Biden has signed two executive orders -- the Equity EO and the Gender Equity EO -- directing every Executive Branch department and agency head to reallocate taxpayer funds to promote "equity" and "gender equity" throughout the federal government, and every entity, throughout the world, that has a relationship with the federal government. This should tell you something about Biden's mindset when he sat down to consider the deal.

What a coincidence! The swap was brokered by none other than the Saudi Crown Prince Mohammed bin Salman. Fortunately, the Biden administration coincidentally absolved the prince of the murder of Washington Post journalist, Jamal Khashoggi, just three weeks ago, ignoring a Director of National Intelligence report, saying, “We assess that Saudi Arabia’s Crown Prince Muhammad bin Salman approved an operation in Istanbul, Turkey to capture or kill Saudi journalist Jamal Khashoggi” -- but, hey! You gotta do what you gotta do. Biden is conducting a proxy war against Russia, and Putin is probably miffed, so The Big Guy couldn't just pick up the phone.

I did a piece on Griner last July, and when you cut through all the bullshit, Brittney Griner is a big, dumb, spoiled-rotten jock. She's been a superstar since she was in high school, but instead of being the Michael Jordan of the WNBA, she chose to get tied up with the Black Lives Matter crowd. Then she started publicly dissing the United States and agitating against playing the National Anthem at her ballgames. They kept playing the Stars Spangled Banner, so, she went to play for the Russians, and like a good little social justice warrior, she did it for the Benjamins. Problem is, Griner tried to smuggle drugs into Russia -- she says it's "medicine" -- judge didn't buy it.

Viktor Bout is a former Soviet military officer who was known all over the world as the “Merchant of Death.” He was in the middle of a 25-year sentence in federal prison after being convicted of conspiracy to kill Americans.

He was dubbed the “Merchant of Death” because of his notoriety for running a fleet of aging Soviet-era cargo planes to conflict-ridden hotspots in Africa. Bout has been accused of supplying arms to Al Qaeda, the Taliban and rebels in Rwanda. His dealings inspired the Nicolas Cage film “Lord of War.”

Rep. Sheila Jackson Lee (D-TX) described Bout as, "a nasty, bad person," but softened her remark by saying, "his weapons might have been used to kill Americans, but he has not killed any Americans." Oh, goody!.

Whelan’s background almost assuredly rules out the possibility that he really was involved in state-sponsored espionage. He did serve in the Marines, and was deployed to Iraq. However, Whelan was bad-conduct discharged for trying to steal thousands of dollars from the government. He is also a citizen of the United Kingdom, Canada, and Ireland. Neither the United States nor any of these other countries employs intelligence officers that were court-martialed for larceny.

Simply put, Joe Biden just sprung the worst gun dealer in the world from prison, and handed him over to the Russians in exchange for a dope-smoking, BBaller. He then attended a memorial for “the victims of gun violence in America."

A senior U.S. official told NBC News that the U.S. government had sought to have both Griner and Whelan released as part of a swap with the Russians. The Kremlin wanted the return of Bout, who has served 11 years of a 25-year sentence in the U.S., but the official said Russia was treating Whelan differently because he is an accused spy, so, the Kremlin gave the White House the choice of either Griner or Whelan -- or none. The White House denies that account and insists they had no choice. It was Griner or nobody.

Jean-Pierre: "We knew about a week or two ago that there was going to be a deal for Brittney Griner and that was what the Russians had presented to us and they wanted the deal to secure her return was Mr. Bout for Brittney Griner."

The trade was so bad, the White House refused to stand behind it. Watch this!


Karen-Jeanne Pierre is unable to defend the trade, and instead distracts from the question. To her credit, she clearly states that what she is saying is the White House version of events. The problem is, there are at least three provable lies in her statement.

2. "The president believes, um, er, when you have an American passport, it means something," KJP says. Maybe that's true for Griner, but the American passport clearly doesn't mean squat for the other seventeen Americans "unjustly held" in Russian prisons. Unfortunately for them, they're all the wrong race, sexuality or gender.

3. KJP's statement, "We were presented with an option, where it was either Brittney or no one," doesn't square with an NBC News report that Russia had initially offered to return Griner or Whelan, but only one of the two. The White House chose Griner. NBC News dutifully "edited" the report to accommodate the White House account, but the original is here.

That's an awful lot of deception coming from the president's spokesperson in a 100-second clip, but that's what we're dealing with from this bunch.

There was never a decision to be made. There was no way in hell the Biden administration would allow a dope-smoking, American-hating, black, lesbian, WNBA superstar, languish in a Russian work camp. Besides, The Left wants Brittney home for the holidays, and the Left has become accustomed to getting what it wants.

The White House and State Department staffers involved in the decision-making process are also the people promoting "Equity." They see the world through the lenses of Critical Race Theory and Queer Theory. Biden's EOs demand it. If a federal government employee wants a favorable annual review, or a promotion, he, she, or it, will support and advance "equity" and "gender equity."

Simply look at a person's attributes and tally a score. Do your own. See if you're a "good person" or a "bad person." Click image for large copy. 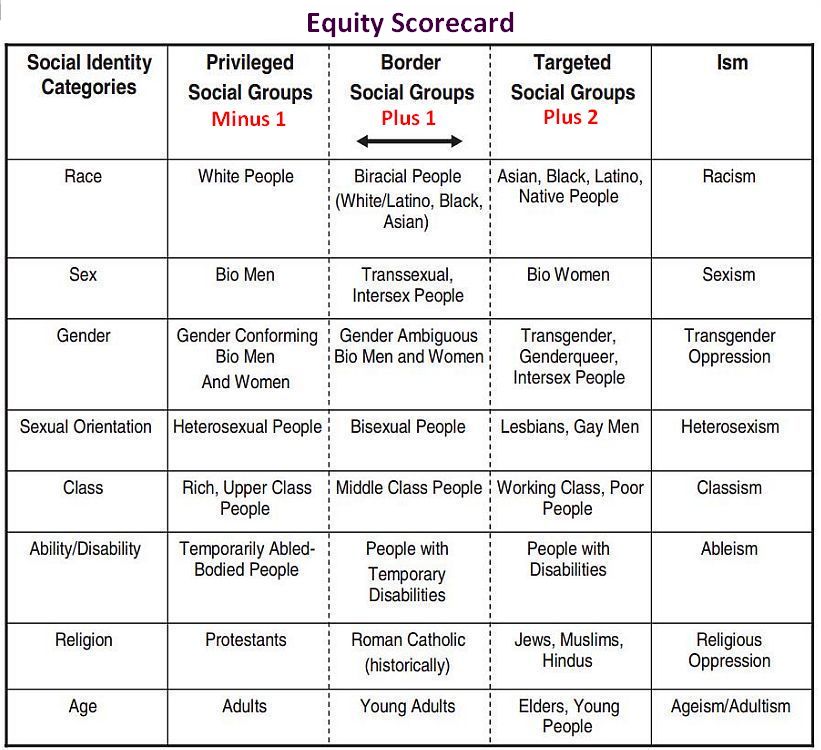 Paul Whelan didn't have a chance. The new rules, the rules "equity are the official policy of the United States government, and these rules are now in play.

Joe Biden's two executive orders made it so -- and he's making us pay for it. Here's some "equity." That raced-based programs are unconstitutional no longer matters. 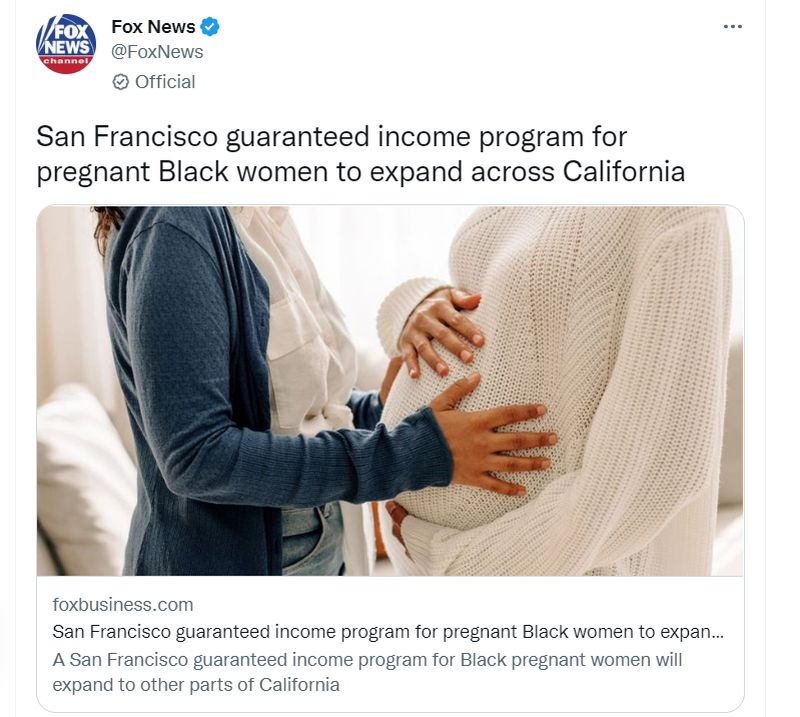 And here's some "gender equity." That programs based on a person's sex or gender are unconstitutional no longer matters. 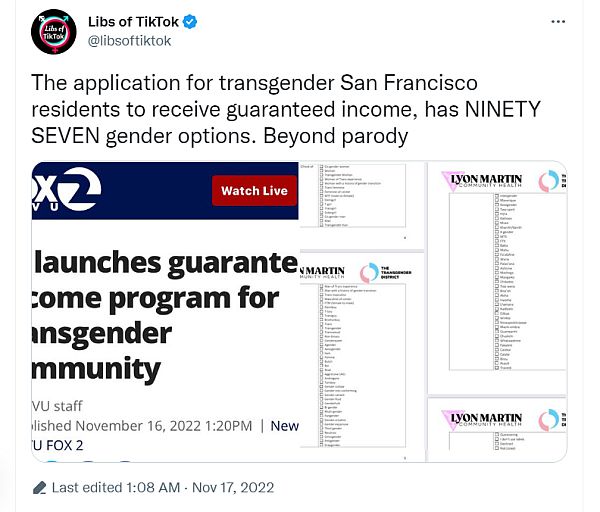 These race-based and gender based programs are thriving, and every one of them are unconstitutional and direct attacks on the U. S. Constitution and traditional America. It's a bonus for the Left because consrvatives are footing the bill.

It appears that no one can stop them, or the lawless DoJ, or the out-of-control FBI. They won't close the border, conduct a clean election, or end the political and sexual brainwashing of our children

The trade was a bad trade. It was made for all the wrong reasons, but that's the way it is now.

Don't get depressed. Get pissed -- and get involved.