Brittney Yevette Griner is an American professional basketball player who made her hated of America very clear and very public.

In 2009, the 6' 9" Griner was named the nation's No. 1 high school women's basketball player and went on to play college basketball for the Baylor Lady Bears in Waco, Texas. The girl, with a voice like Barry White, won everything, Olympic gold medal, an NCAA championship, a FIBA World Cup gold medal and a WNBA championship. She was signed by and plays for the Phoenix Mercury.

Everything was roses for Brittany. Then, in 2013, the all-star came out as lesbian and hooked up with her first wife, Glory Johnson, who is also an All-Star player in the W.N.B.A The two were arrested and detained for beating the crap out of each other in 2015. 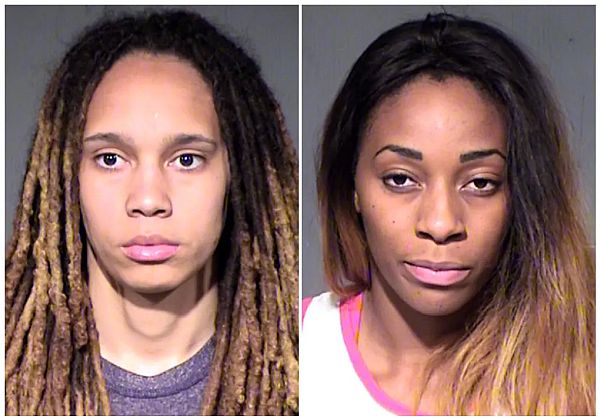 This was no ordinary cat-fight. These were two huge, world-class athletes, going at each other. Several people inside the home tried to break up the fight before the police were called -- a couple of them were injured in the attempt.

After pleading guilty to domestic violence an entering counseling, Griner kept her personal life out of the headlines after that and by 2019 she had married Cherelle Watson, was on the covers of the country's magazines. Her net worth had grown to an estimated $5 million and she was pulling in another million playing in Russia during the off-season.

Then came 2020. We don't know if it was because Brittany was hanging out with all those white-supremacist Russkies, hooking up with Black Lives Matter, or because everybody was pumped with the 2020 campaign, but Brittany decided to take a dump on America.

In the summer of that year, following the drug overdose by George Floyd, Griner explained that she would be protesting the playing of the national anthem before games by remaining in the locker room.

During a video call to reporters at the beginning of the season in July 2020, Griner said:

"I honestly feel we should not play the national anthem during our season. I think we should take that much of a stand."

In a second interview Griner said:

“I’m going to protest regardless. I’m not going to be out there for the national anthem. If the league continues to want to play it, that’s fine. It will be all season long, I’ll not be out there. I feel like more are going to probably do the same thing. I can only speak for myself.”

On WNBA Opening Night, the Phoenix Mercury and Los Angeles Sparks walked off the court during pregame warm-ups before the playing of the national anthem as a protest against police brutality. Shortly thereafter, they observed a 26 second moment of silence to call attention to the killing of Breonna Taylor.


According to Mercury center Brittney Griner, that will not be the last time she engages in such a demonstration.

Not only did she keep her word, but she started to play basketball for the Russians. Griner didn’t feel she was making enough money in the States -- and get this -- she stands for the Russian national anthem.

Well, that brings us to why we're here. In February, when Brittany last entered Russia, she brought "a little something " in her luggage that the Russians consider a "naughty" -- a couple of vaporizer cartridges containing cannabis oil -- and Griner was arrested on cannabis possession charges by Russian authorities. The charge comes with a possible sentence of up to ten years in prison.

Griner went to a foreign country with drugs and got busted, and she, along with the usual commie loudmouths, are now begging the Biden regime for help.


Now, if Biden wasn’t waging a proxy-war with Russia, getting Griner out of Russia, might be easier, nevertheless bringing Griner back to the country she hates has become "a priority" for the Biden administration.


The sister of Paul Whelan, an American who has been held in Russia since 2018, questioned why his family hasn’t received a call from the White House, after President Biden and Vice President Kamala Harris reached out to the wife of Brittney Griner to “reassure” her of their efforts to free the WNBA star.

“To begin with, we don’t begrudge the Griner family and their supporters any of the attention that they’re getting from the president,” Elizabeth Whelan told CNN Wednesday. “I mean, it’s really wonderful. They have resources far beyond what our family does.

“I think our concern is, you know, why the outreach to some families and not others?” Whelan added. “There are 55-plus families who would like to have that same degree of attention.

I think we all know the answer to that. If America doesn't bring her American-hating daughter home, it will prove America is a racist, white power system, and Black Lives Matter will be in the streets.

People like Griner have no problem hating America while taking her bounties. It's who these people are. Although Brittney has been in Russia for six months, she has yet to accuse Russia, a country that is 96% white, of being a white power system, and she hasn't labeled any Rooskies a racist either.

I will make a bet right here, that she will not change her ideology one little bit after this experience. When she first returns she'll be humbled, but a year down the line, she'll revert to type.

If Kaepernick never knelt, he’d just be another failed quarterback. If Rapinoe never knelt, you wouldn’t even know who she was. Same with Griner. Social Justice for these people is a moneymaking proposition. Nothing more.

If I had the power, I'd see that Brittany did penance for six months in a Russian prison, and then I'd quietly bring her home -- no hero's welcome for damned sure!

The bigger
the government
the smaller
the citizen