The FBI Is Broken 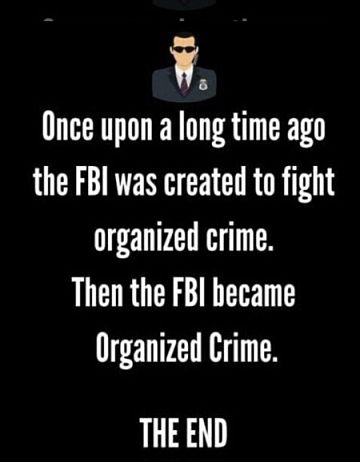 And It Can't Be Fixed

The DoJ and FBI have become the Democratic Party's secret police

That was five day before Hillary attorney, Michael Sussman, handed FBI general counsel James Baker 2 jump drives full of cherry-picked and hand-massaged Alfa Bank data that "suggested" there was a connection between Trump and a Russian bank.

The FBI always knew what was going on. They just made believe they didn't. It served everybody's purpose and everybody at the FBI was a Democrat except Comey -- and he had his own agenda.

The FBI’s glaring lack of curiosity concerning the source of the Alfa Bank “intel” mirrors in many respects how FBI agents approached the Steele dossier -- if it wasn't about Trump or the Russian Bank, it was not part of the investigation.

The FBI knew Russiagate was bogus before the FISA warrants and investigations. Despite that fact, the FBI became an active participant in the conspiracy. They knew, or should have known, that the information they were receiving from Fusion GPS and CrowdStrike was bogus.

Former FBI chief, Robert Mueller, and his partner, Andrew Weissmann, spent 2 years investigating Trump-Russia with a team of 19 lawyers, $40 million in resources, 40 FBI agents, 2,800 subpoenas, 500 search warrants and 500 witnesses. yet they never discovered that the Democratic National Committee and the Hillary Clinton campaign created the hoax they were investigating?

Robert Mueller was appointed to look into the Trump-Russia collusion accusations. He looked into everything except the people who were at the heart of Russiagate. You will not believe this performance.

Revolver News and The New York Times published several inconvenient stories that encouraged a more aggressive investigation of the “Ray Epps third rail.” These reports led reasonable people to wonder why an individual who was publicly pictured and identified on an FBI handbill with the words, "Seeking Information" and "Violence At The United States Capitol," still had no charges filed against him.

The FBI responded to these important media stories by quietly purging all FBI online references and images of Ray Epps from the Internet. The FBI then pivoted to a posture of, “Ray Epps? Never heard of him.”

Agents of the FBI Field Office in Phoenix (where Epps lives) have gone so far as to explicitly deny that Ray Epps even exists -- and the "we know nothing" chorus is not just among field agents. It goes all the way to DC.

The FBI sent the Executive Assistant Director of the FBI, Jill Sanborn, who has 20 years experience in counter-terrorism, to face a congressional inquiry. Her instructions were quite simple. "No matter what they ask you, you are to respond, 'I can't answer that'."


She performed magnificently, proving that "The Untouchables" is really just a TV show.


Olsen's job description says he is tasked with leading the Department of Justice’s mission to combat terrorism, espionage, cyber crime, and other threats to the national security.

The guy that's in charge of our national security refuses to answer a single question directed towards him, but he's the guy that, by his job description, is supposed to know it all (and he does), but he has his orders too, and they are the same ones the DoJ gave Jill Sanborn -- play Mickey the Dunce -- so he did, and gave Cruz nothing.

This one is a real beauty. In the run-up to the 2020 presidential election The FBI, backed up by 50 stalwarts from the "intelligence community" swore up and down that any reference to the thousands of damning emails, text messages, photos (some of minors) and X-rated videos was "Russian disinformation.:

"Perhaps most important, each of us believes deeply that American citizens should determine the outcome of elections, not foreign governments. All of us agree with the Founding Fathers’ concern about the damage that foreign interference in our politics can do to our democracy."

"It is for all these reasons that we write to say that the arrival on the US political scene of emails purportedly belonging to Vice President Biden’s son Hunter, much of it related to his time serving on the Board of the Ukrainian gas company Burisma, has all the classic earmarks of a Russian information operation."

The former officials conceded that they did "not know if the emails provided to the New York Post by President Trump’s personal attorney Rudy Giuliani, are genuine or not and that we do not have evidence of Russian involvement" but still said that they were "deeply suspicious that the Russian government played a significant role in this case."

The FBI has now had the Hunter Biden laptop for more than two years and still can't seem to find the evidence of crimes committed by the current president and his drug-addled son, that are all over the Internet.


So the election came and went, and then the truth came out. The FBI and all those members of the "intelligence community" lied. They hid the truth, to prevent a scandal in the weeks before the election and their subterfuge worked. Biden was elected POTUS in an election awash with all kinds of voter fraud.

The judge in the Whitman kidnapping trial acquitted two men and declared a mistrial for two others in April, after their October 2020 arrests for allegedly plotting to kidnap Democratic Michigan Gov. Gretchen Whitmer. The trial exposed the fact that the FBI conceived of the kidnapping and enticed and entrapped the alleged kidnappers into the plot.

Special agent Steven M. D'Antuono was in command of the FBI’s Detroit Field Office all through the conspiracy, and in classic bureaucratic behavior, D'Antuon has been promoted. He is now in charge of the DC field office overseeing the Jan. 6 investigation.

Wray seemed confused that someone in charge of an FBI field office ought to have been exhibiting oversight over the agents beneath him, but the larger question is, do Americans deserve to know if it is consistent with FBI training and practice to launch a criminal activity, attempt to recruit others to participate in it, then prosecute the joiners?

Another of the Democratic Party's schemes began in earnest last October, when Biden's Education Secretary Miguel Cardona quietly solicited a letter from the National School Boards Association (NSBA). The NSBA, in an internal memo sent on October 12, revealed that they had held discussions with White House officials about the language before composing and sending the letter to President Biden.

The letter begins, "America’s public schools and its education leaders are under an immediate threat. The National School Boards Association (NSBA) respectfully asks for federal law enforcement and other assistance to deal with the growing number of threats of violence and acts of intimidation occurring across the nation," and continues from there.

Right on cue, Attorney General Merrick Garland followed up by saying that the letter, setting out the NSBA's "worries about threats," was the starting point for plans for a task force to protect members of school boards, and lo and behold, just ninety days later, Olsen appears before the Senate with a fully-staffed office, brim-full of social-justice lawyers, all suited-up and ready to go, closing the circle. No federal government has ever moved with such swiftness in responding to an emergency in the past.

After the draft opinion from the U.S. Supreme Court was illegally leaked  regarding the Dobbs v. Jackson Women’s Health Organization abortion case, pro-abortion activists started unleashing threats and acts of violence against the Supreme Court Justices while the Biden administration simply ignored the rule of law.

Attorney General Merrick Garland has continued to ignore the federal statute despite protests and threats against a judge’s residence. The law, 18 U.S.C. § 1507, enacted by Congress in 1950, states: “Whoever, with the intent of interfering with, obstructing, or impeding the administration of justice, or with the intent of influencing any judge, juror, witness, or court officer, in the discharge of his duty, pickets or parades in or near a building housing a court of the United States, or in or near a building or residence occupied or used by such judge, juror, witness, or court officer, or with such intent uses any sound-truck or similar device or resorts to any other demonstration in or near any such building or residence, shall be fined under this title or imprisoned not more than one year, or both.”

Merrick Garland's Justice Department is far too busy hunting down the dreaded white supremacist, to go after what are clearly Democrats terrorizing justices and their families in their homes, at all hours of the day and night. 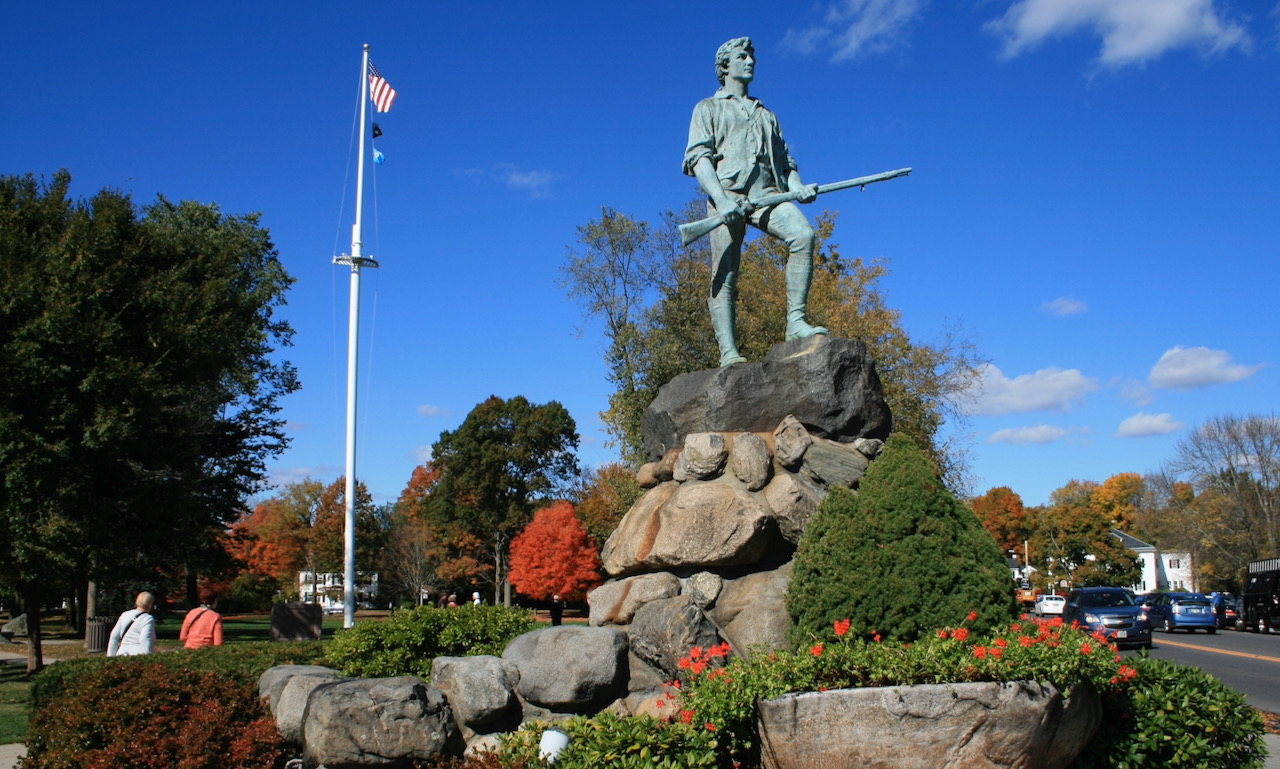 Notable exceptions to the FBI's chart are the battle flags of Antifa and Black Lives Matter, the violent leftist extremists that have caused $2 billion in property damage to federal, state and private property. Cause the deaths of more than 200 civilians and the hospitalization of over 700 police officers.

I always believe that when it comes to politicians, and Wray IS a politician, the best policy is to ignore what they say and simply watch what they do -- and what the FBI is doing is targeting conservatives as enemies of the state, while ignoring the real terrorists of Antifa, BLM, Jane's Revenge and the rest.

I'm going to end this week's rant, by pointing out, the FBI is continuing its war against conservative Americans. Senator Josh Hawley (R-MO) questioned the FBI's director about the FBI's planned audit of Missouri's sheriffs' offices' records of concealed carry permits.

"I want to know what in the world you're doing with this, and frankly, I don't like the fact that the FBI is snooping around the records of the concealed carry permits of Missourians."

Naturally, Wray slipped right into his Sgt. Schultz act and dodged and weaved and "ummed" and said he'd get back to the senator -- knowing full-well that he never will.

What do you think? Is Wray just full of crap, a really incompetent director, or something else? Beyond that, why does this guy still have a job?

Elliot Ness is dead, Christopher Wray is in charge of the FBI, and the FBI is at war with the American People.

The FBI has raided the Mar-A-Logo home of the 45th President of the United States. The predicate for this raid is a media report that President Trump stuffed classified papers down a toilet.

I assume the FBI has long sice forgotten that Hillary Clinton destroyed 33,000 emails that were under subpoena.

Using an unsecured private email server for government use, of course, is a crime in and of itself, but Hillary took it a step further by covering up the underlying crime. In 2015, she initially refused FBI requests to turn over the server in question, even as she later used the server’s eventual breach by hackers as supposed “proof” of Russian interference in her campaign. After years of holding herself above the law, telling lie after lie, and months of flat-out obstruction, Hillary finally turned the email server and three thumb drives over to the FBI. True to form, Hillary had destroyed anything that could be used against her. The server has been professionally wiped clean of any usable information using BleachBit. The thumb drives contain only what she selectively culled. Hillary went so far as to have her staff destroy their Blackberries with hammers, and the corrupt FBI never raided Hillary's home.

Time will tell, but I have a page in the website that list examples of the Democrats not understanding the Law of Unintended Consequences, and I think they've finally gone a done it -- they have f*cked up big time!

I do have one concern. That Obama, who you know is behind all of this, might really want to start a civil war. I would not put it past him.